skip to main content
Return to Fordham University
You are at:Home»Arts and Culture»How We Hear Influences Who We Are, Sound Scholar Finds

The sound of a New York City subway roaring beneath an apartment building at night will usually startle a newcomer. Over time, though, the sound becomes familiar and gradually fades, until one day that same New Yorker might stop hearing it altogether. 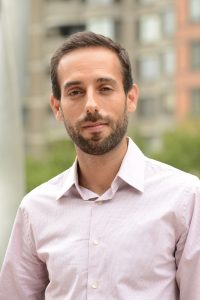 Sound scholar Andrew Albin is working on the first English translation of the Melos amoris, a medieval text about the mystical experience of hearing angelic song. (Photo by Joanna Mercuri)

“In a way, you become a New Yorker when you become accustomed to the sound of the subway running by,” said sound scholar Andrew Albin, Ph.D. “Those two very different relationships to that sound, [being startled versus not hearing the train at all], are tied to two different identities.”

Albin, an assistant professor of English, works in an emerging field in the humanities known as sound studies. The field explores how we experience sound and what meanings sound holds for us as individuals, within our communities, and in our social and historical contexts.

“Sound scholars are interested in the full range of sound experiences—speech, soundscapes, music, environmental sounds, animal sounds, imagined sounds, and so on,” said Albin, who also specializes in medieval literature. “[How do] social, cultural, material, environmental, and historical [factors]influence the way listeners actually hear those sounds?”

Some questions that a sound scholar might tackle include: Did medieval audiences listen to music with “different ears” than modern audiences, who listen to reconstructions of medieval music on iPods? Does our experience of sanctity change based on whether we worship in a hushed and hallowed Catholic cathedral versus among the jubilations of an evangelical church? How does growing accustomed to the screech of the subway become a sign that you’ve become a New Yorker?

“The silence of the countryside or the hubbub of the city… can inform the ways you conceive of yourself, the way you understand your community, the values you hold, and even the texts you read and music you listen to and how you listen to it,” Albin said.

“Sound scholars are finding ways to talk about that. They ask, ‘What are the meanings that are attached to these sound experiences? Why do they take the shapes that they do? What patterns are emerging and what does that tell us about the culture in which we live?’”

The Sound of Angels Singing

Albin’s current research focuses on the works of 14th-century English mystic Richard Rolle, who was famed for his alleged ability to hear the sound of angels singing. His auditory experience of the divine sets him apart from other medieval mystics, whose mystical experiences of God were primarily visual, or even avoided the five senses entirely. This peculiarity, however, made Rolle a controversial figure.

A page from Frances Comper’s translation of the “Incendium amoris.”

“His critics were very skeptical of him,” Albin said. “Their response was to complain there’s no way to say for sure whether or not he is hearing angels singing. More likely than not, they said, he’s probably just enjoying a rich diet, drinking lots of wine, and hallucinating.”

Nevertheless, Rolle became one of the most widely read authors in medieval England. He went on to pen a mystical treatise, the Melos amoris, of which Albin is doing the first English translation. In it, Rolle writes a sort of “musical” text, full of alliterative and rhythmic prose, to gesture toward the beauty of angelic song and illustrate how the devout soul can become like a “musical harmony, a perfect fourth,” Albin said.

Rolle’s mysticism spread throughout northern England, launching angel song to what might have been No. 1, had there been medieval music charts. However, this ability to hear angelic song was not bestowed upon just any believer, Rolle stipulated. The ability meant you were one of God’s “predestined elect” and thus guaranteed a place in heaven. With their promise of spiritual supremacy on earth and a reserved seat in paradise, Rolle’s claims began making waves in the socio-religious hierarchy.

“You can claim to hear it and nobody can prove it one way or another. And to claim you hear angels’ song potentially means that you acquire a kind of social cache, a spiritual authority that allows you to move around in social categories that you didn’t have access to and to speak in arenas you otherwise couldn’t speak in—especially if you’re a lay person,” Albin said.

“It becomes this widespread phenomenon where people are hearing angels left and right. So the mystics of the following generation write documents explaining to people that they may think they are hearing angelic song, but they’re actually not—they’re thinking too hard or wanting it too much and hence deluding themselves into thinking it’s happening.”

In addition to translating the Melos amoris, Albin is collaborating with Sine Nomine, a musical group in residence at the Pontifical Institute for Mediaeval Studies in Toronto, to bring Rolle’s mysticism to life.

“One manuscript of the Melos amoris has two items in it—one is the treatise in Latin and the other is a gathering of music notation. And no one has noticed that these two are next to one another,” Albin said.

The group will perform a concert in December of 2015 featuring Rolle’s music and a recording of the performance will be packaged with Albin’s translation, which is due out in 2017.

“When a medieval text that’s all about angels singing is put next to a collection of medieval music, you have to think there’s something interesting going on there,” he said.