skip to main content
Return to Fordham University
You are at:Home»Arts and Culture»How the Faithful Serve the City’s Hungry

When Dale Lindquist, L.C.S.W., D.Min., began co-directing Fordham’s Beck Institute on Religion and Poverty a few years ago, one of his first projects was to compile data on ways that New York City’s faith community was serving the city’s poor.

What he found out astonished him. 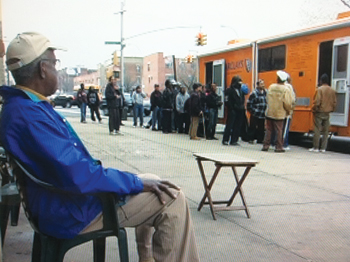 “Many don’t realize how much the faith community is doing to help,” said Lindquist. “From large programs in dedicated buildings to very modest programs running out of basements in churches, synagogues and mosques, there are incredible stories.”

A former documentary filmmaker who now directs the online master’s in social work program at the Graduate School of Social Service, Lindquist combined his passion for social service with his love of film to direct, shoot, and editOur Daily Bread: Feeding the Hungry in New York City. The 45-minute documentary profiles three emergency food programs in New York City, all organized and run by churches and their affiliates.

The movie was set to premiere at Fordham on May 2 on the Lincoln Center campus.
Our Daily Bread focuses on the Brooklyn-based St. John’s Bread and Life, Holy Apostles Soup Kitchen of Chelsea, and the West Side Campaign Against Hunger at the Church of St. Paul and St. Anthony. He selected these three for the film because they are the largest faith-based emergency food programs in the city.

Yet each program started out more than a decade ago with a simple knock on the church doors by someone in need of something to eat, he said.

“These congregations responded by buying food and fixing sandwiches and, before you knew it, they were feeding hundreds of people a day. They are really extraordinary programs.”

In a city where it is estimated that one in five New York City residents uses emergency food services, such programs bring hope and comfort to those who don’t know from where their next meal is coming, said Lindquist. Through an organized setup of soup kitchens, food pantries and mobile kitchens, the three faith-based programs featured in the documentary feed more than 1 million hungry people per year.

“These are very innovative programs providing unique approaches to offering services while simultaneously honoring the capacities and dignity of those being served. These are qualities that can readily be replicated,” said Lindquist, who hopes the documentary encourages support of existing programs and provides inspiration and ideas for ways that faith and community organizations can follow suit.

Lindquist hopes the film will inspire conversations on the topic of hunger in New York City, what is being done to alleviate it, and what work remains ahead.

“With the current economy, the numbers of hungry are growing,” he said. “It puts an enormous burden on congregations, who have to keep coming up with ways to support their work.”