skip to main content
Return to Fordham University
You are at:Home»Arts and Culture»Historian Looks Back at a Complicated History of Slavery and Education 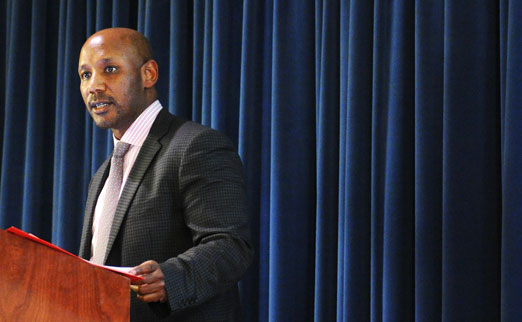 Craig S. Wilder, Ph.D., FCRH’87, head of the history faculty at the Massachusetts Institute of Technology (MIT), returned to his alma mater on Feb. 20 to discuss his book, Ebony & Ivy: Race, Slavery, and the Troubled History of America’s Universities (New York: Bloomsbury, 2013).
The book details the not-so-loose ties between Ivy League colleges and the institution of slavery. His talk highlighted several defining moments in the early struggle for blacks to obtain a higher education, in particular Northern opposition to education for African Americans in pre-Civil War America.

Wilder, who is also a graduate of Columbia University, featured Harvard, Brown, Dartmouth, the University of Pennsylvania, and other universities in the book because of their complicated relationships with slavery. Given his own ties to the Ivy League, Wilder said he approached the project with a certain amount of “trepidation”.

He described his early days of researching the subject for an article that would eventually become the basis for the book. He said he often used euphemisms to describe the work to archivists, such as “colonial schools” or “17th-century education.” But the archivists recognized a pattern in his requests and became willing collaborators—sometimes sliding files across the library table with a “you should look at this” wink.

“The archivists were the coolest people in the project,” he said.

Wilder observed the universities’ struggles to develop best practices in dealing with their complex, and sometimes messy, histories. He called Brown University’s Steering Committee on Slavery and Justice’s 2006 report the “perfect template” for dealing with the issue. The report included recommendations to the university president and trustees on how to compensate for the institution’s past behavior, which they accepted.

Nevertheless, although several grassroots efforts at other Ivy League institutions supported similar studies, none of the other universities followed through with official acknowledgments or apologies.

“The politics of whether or not you want to do that shouldn’t shape the academic decision as to whether or not we want to be honest about our own past,” he said.

Beyond financial ties and associations, some of the examples Wilder cited in his talk were detestable—including a description of how a mob in 1835 destroyed the interracial Noyes Academy in New Hampshire by pulling the building from its foundation and dumping it into a lake. Another university used the tanned skin of a black slave as a teaching tool in a class, he said.

In spite of such findings, Wilder argues that the benefits of confronting such a past are far better than ignoring them. He said he would love to see universities explore their historie
s more openly.

“Being afraid of your archives is like being afraid of your diary,” he said. “It’s painful at times, but there’s a very good reason to look back at our own past: to think about where we’ve come, how we got here, and the work that’s left to be done. And we only get to that point by reflecting on the real, rather than the imagined, past.”