skip to main content
Return to Fordham University
You are at:Home»Arts and Culture»Having Math Troubles? Read a Poem 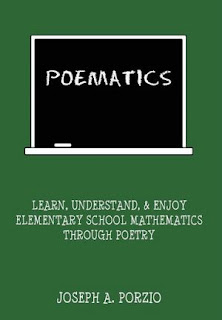 For children and adults alike, math can be notoriously difficult to master.

So how about using poetry?

That left brain/right brain-crossing technique is precisely the approach that Joseph A. Porzio, team associate for the Partnership Support Organization/Children First Network at the Graduate School of Education’s Center for Educational Partnerships, has taken.

A compilation of math poems and math art, the book serves to supplement elementary mathematics by providing a new avenue for teachers, students, and parents to access the subject.

“Oftentimes, adults and children have math anxiety, so I attempt to address that issue, especially for elementary schools, by making a fun way to approach math,” Porzio said. “Teachers can use it to motivate kids, to integrate it into lessons they’re doing, and to use it as a culminating activity.”

The book’s 29 poems, featuring titles such as “Tens and Ones” and “Skip Count to Multiplication,” span several topics in mathematics, including algebra, fractions, and geometry. In “Meeting the Triangle Family,” Porzio portrays a clan of triangles who live at the corner of Polygon Way and who each represent a triangle type.

…Mama Triangle—she loves our sides.
Though we’re different, she likes what she sees
‘Cause she knows the sum of our angles
Is one hundred and eighty degrees.

“This is a compilation of work I’ve been doing over the years,” Porzio said. “And it’s always been in response to questions raised by teachers, parents, or students, who would say ‘Joe, is there another way to approach teaching basic facts in multiplication, division, or fractions?’ So that was my task—to come back the next day with a different strategy.”

According to Porzio, his unique approach comes at an opportune moment. In recent years, the National Assessment of Educational Progress (NAEP)—known as the “Nation’s Report Card”—revealed that students’ math scores on national exams have shown only marginal positive change.

Consequently, most states are transitioning from statewide learning standards to the Common Core Learning Standards initiative.

“It’ll have an impact on state assessments. There will be more challenging and more rigorous tasks. So we’re moving to support that rollout,” Porzio said. “We want all students to be proficient in math.”

Proficiency, however, involves more than understanding just the mathematical concepts, Porzio pointed out. Students also must have sufficient communication skills to understand extended response questions, which require the students to both read a question and write an in-depth answer.

But what better way to enhance communication skills than by reading and reciting poetry?

Going a step further, Porzio incorporates several “word poems,” which instruct readers on such topics as grammar and spelling. In “Change Has Many Meanings,” for instance, Porzio demonstrates how diversely the word “change” functions:

…Change has many meanings.
It’s a very special word.
One that’s used by young ‘n old.
Here’s some I’m sure you’ve heard.

“Can you give me change for a quarter?”
A friend asked. “Will you please?”
“Of course!” I said, and nodded my head
As I made change with ease.

Some things a little bit,
Like my weight or growing tall,
But the hand I use to write my name
I never change at all…

Whether math, grammar, or anything in between, then, the Poematics poems aim to provide a new window for students to access the material, Porzio said.

“Kids (or adults) will get a problem and they’ll look at it and they’ll push off and say, ‘I can’t do this. I hate problem solving, and I always hated it.’ What they’re really saying is that they lack the problem-solving skills that should be taught early on,” Porzio said. “This gives a teacher another avenue to pursue.”