skip to main content
Return to Fordham University
You are at:Home»Arts and Culture»Hard Truths and Uncomfortable Realities In Fordham’s Mainstage Season 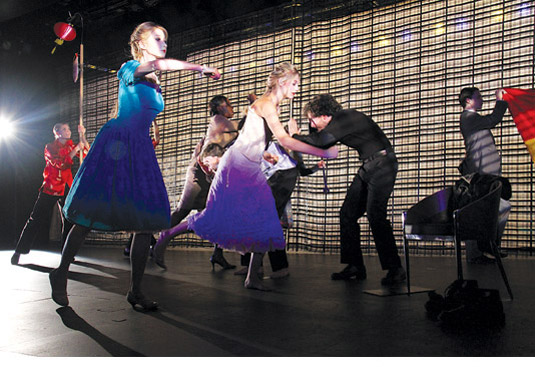 From left to right, Mandy Heiser, Sarah Hegarty, and Connor Dunlap in foreground; Anna Crivelli, Amber Avant, Winter Dunn, Alex Porterfield, John Donchak, and Dylan Ungaretta in background. All appeared in What of the Night?

Racism. Homophobia. Poverty. Class warfare. Each one is uniquely ugly, damaging, and insidious.

And yet, they are very much a part of the American landscape. The problem, according to Matthew Maguire, professor of theatre, is that too many people choose to see otherwise.
“Denial is a river that flows through the American gene pool,” said Maguire, who directs Fordham’s theatre program.

The theme of this year’s mainstage season is Facing Demons, and it kicked off on Oct. 3 with a co-production (with INTAR Theatre) of Maria Irene Fornes’ What of the Night? That play, a quartet of one-acts, delved deep into the various kinds of poverty that afflict people.

The season continues Nov. 6 through 16 with a play that Maguire will direct himself, Not All Thieves Come to Harm You, by Dario Fo, translated from Italian by Joseph Perricone, Ph.D., professor of Italian and comparative literature.

In February, the third production will be Jackie Sibblies Drury’s We Are Proud to Present a Presentation About the Herero of Namibia, Formerly Known as South West Africa, From the German Sudwestafrika, Between the Years 1884-1915. Finishing out the season in April will be The Labyrinth of Desire by Caridad Svich.

Although the arc of the season will flow from drama to comedy, to drama to comedy, all four plays are intended to ignite conversation among viewers on topics that we too often turn away from. Americans, Maguire said, show a knack for this in some presidential elections, when the public might choose the Big Lie over the hard truth.

“For example, Jimmy Carter had issues as a leader, but he was attempting to get the American people to wrestle with intractable problems. In a way, he was trying to move the American psyche from childhood into adolescence by getting the populace to understand we’re not perfect now. Let’s confront our demons,” he said.

“Ronald Reagan said, ‘That guy’s a total pessimist, forget all that. We’re the greatest country in the world,’” and subsequently won against Carter by a large margin.

Maguire said that “false optimism” is part of a deep American propensity to “not want to face the problem.”

As with all of Fordham’s mainstage seasons, the featured plays are meant to be in dialogue with each other. What of the Night? was the catalyst for the theme, and the rest of the plays were chosen afterward.

The play Not All Thieves Come to Harm You will be presented for the first time in English, said Maguire, who has worked with the play in Italy several times. The play skewers the notion that we are one people divided by class warfare alone, and it does so while clothed in the garb of a farce.

“Political theater is hard to do because it’s often didactic, on a soap box, but Fo is hilarious. His particular political vision is very clear, but it’s subversive because it is so funny. It’s a comedy, and we need a comedy in this season,” Maguire said.

Indeed, after patrons have watched the racially charged We Are Proud to Present a Presentation, a play within a play that debuted in 2012 at the Soho Rep theater, they will likely be looking for something lighter. The play deals with another familiar form of American denial—racism.

“There’s this phrase out there, ‘post-racial.’ [Some] people like to say ‘Well, that was the ’60s. We solved that problem, let’s move on,’” Maguire said.

For balance, the romantic comedy of Labyrinth will close out the season.

Maguire says he draws inspiration from the Theatre of Dionysus, where ancient Athenians gathered to watch performances that were expected to speak truth to power. While he acknowledges that film and television dominate social discourse, theatergoers can still influence, in small ways, “the people who they meet down the road.”

“It’s possible to break through denial, but only by continuing to push against it.”