skip to main content
Return to Fordham University
You are at:Home»Arts and Culture»Guggenheim Curators to Join Alberto Burri Symposium 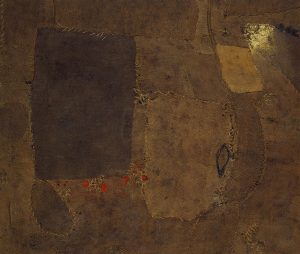 The artist was part of the avant garde in post-World War II Italy, when the nation was dealing with defeat and destruction. He used abandoned and discarded materials as if the paintings were part of a reclamation project, said Jo Anna Isaak, the John L. Marion Chair in the Department of Art History and Music.

Burri’s work is currently the subject of a Guggenheim Museum exhibit, “Alberto Burri: the Trauma of Painting.” On Dec. 1 Fordham will co-sponsor a symposium, “Alberto Burri: Materials, Methods, and Memory,” bringing exhibition curators Emily Braun and Carol Stringari together with Burri scholars and friends.

Burri entered the war as a doctor and left as an artist. His unconventional journey took him from serving in the Italian army in Tunisia to becoming a prisoner of war in Texas. Isaak called his time in the POW camp a “mixed bag,” in that his treatment wasn’t as severe as might have been experienced by Germans in Russian POW camps. But, she said, it was hardly easy. Rations were cut and he wasn’t always treated well.

As Burri was an officer in the Italian army, he wasn’t relegated to manual labor in the Texas camp. He was also given the chance to create after a priest helped several of the prisoners start art projects.

“This was an entirely self taught, self-activated activity,” said Isaak.

She added that the artistic activity began as de facto therapy for trauma resulting from war experiences and prison. His early work might fall into the category of folk art, but the artist quickly segued into the realm of serious art. The Red Cross shipped many of his paintings back to Italy, where he eventually returned in 1947.

He went home to a ravaged Italy, where Isaak said the people had been “mopping up” from the war for a while. The postwar landscape became fodder for the Italian avant garde, perhaps most familiarly in black-and-white Neorealist films.

The artist is best known for his series of Sacchi (sacks) paintings made from stitched and patched remnants of torn burlap bags, often combined with fragments of discarded clothing.

“Critics made various connections, none of which he liked, such as seeing his work as a mending or suturing of his wounds,” said Isaak.

Burri familiarized himself with the contemporary art scene in Rome too, influencing but not joining movements such as the Arte Povera, Neo-Dada, and Process art.

American artists dropped by his studio and were profoundly influenced, said Isaak. She called Robert Rauschenberg the “biggest pirate of his work.” The exhibit is the first Burri show in the United States in more than 35 years, she said, and the most comprehensive ever mounted of an influential master who got his start in an American prison.

The symposium is sponsored by the Honors Center of Italian Universities at Sapienza University in Rome and by Fordham’s Department of Art History and Music.

You can watch the symposium live on Dec. 1: