skip to main content
Return to Fordham University
You are at:Home»Arts and Culture»Gone But Not Forgotten: A Photographic Vision of School Segregation

A show at the Lipani Gallery on the Lincoln Center campus features photographs of a series of unremarkable buildings, rendered significant through technique and context.

The technique, applied in Photoshop, sets the buildings apart from their surroundings by screening the background environment down to a grey veil.

And the context is America’s racial history, as each photo of a building depicts a formerly segregated school for African Americans, located north of the Mason Dixon line.

A panel discussion and closing reception will be held on Monday, Sept. 19 at 6 p.m. at Franny’s Space in the Lowenstein Center.
Reviewing White’s show on Sept. 2, the Wall Street Journal notes how White’s technique “concentrates attention on the buildings, their histories, and their meanings.” White rendered those buildings that no longer stand in black silhouette, creating a void at the center of the composition.

“I was making a different type of photograph, I wasn’t interested in photographing the buildings in a straightforward way, or using text,” said White. “I wanted to move away from that and explain it in a purely visual way, to reconnect to the idea of the veil separating black world and white world.”

The artist said he often employs the term “veil” as homage to W.E.B. Du Bois, who, in The Souls of Black Folk, wrote of a “vast veil” that separated African Americans from the rest of society. In the exhibit, that separation plays out in the small towns of New Jersey and Ohio, as the photos create a catalogue of areas often not visually associated with the history of segregation. 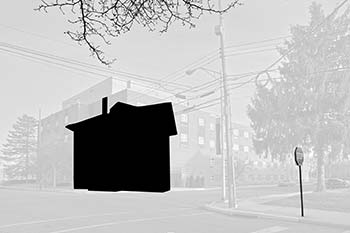 Those schools no longer standing are depicted as silhouettes against the landscape where they once stood.

“The visual representations of segregation are the stories that come out of the South. Everyone remembers the photo of George Wallace on the schoolhouse steps, the marches, and the hoses,” said White. “My interest lies in [the fact]that segregation was very much a northern institution as well, with a long history. It was extremely widespread and addressed in different ways by different communities.”

“White suggests narratives and talks about how a broader history gets written in this country,” said Ruble. “One of the things I love about this series is there are stories you don’t hear every day. Those stories . . . are a very important part of our history.”

The series got its start after a retired schoolteacher from Brooklyn, Illinois told White that he went to a segregated school. White photographed the building, and soon after began his research on the subject.

With support from a Guggenheim Fellowship, the Graham Foundation, and from Stockton University where he is a member of the faculty, White was able to travel and photograph sites from 2004 to 2007. He gathered information on the sites through interviews and through internet research.

Ruble said that, beyond the show’s aesthetic merit, there is an anthropologic and historic significance as well—all of which will be explored in the panel discussion, titled “Mine, Yours, Ours: A Conversation on Segregation in America, Past and Present.”

The panelists include:
Rebecca Carroll, producer of special projects on race at WNYC, and author of five nonfiction books, including Sugar in the Raw and Saving the Race;
Deb Willis, MacArthur Fellow and professor and chair of the Department of Photography and Imaging at the Tisch School of the Arts at New York University;
Marta Gutman, Ph.D., architect and professor at the City College of New York, and author of A City for Children; and
Wendel White, photographer and distinguished professor of art at Stockton University.

Ever Rising: An Artist’s Take on the Ways We Remember–And Forget–The Troubled History of Race Relations in America