skip to main content
Return to Fordham University
You are at:Home»Arts and Culture»God-Level Knowledge Darts with Desus and Mero
Photo of Desus Nice and The Kid Mero, 2019
Desus Nice and The Kid Mero (aka the Bodega Boys), New York Times bestselling authors and critically-acclaimed late-night TV talk show co-hosts, joined The Bronx is Reading and Fordham for a virtual conversation about their new book, God-Level Knowledge Darts: Life Lessons from the Bronx. Assistant Professor of Communication and Media Studies Brandy Monk-Payton moderated the Feb. 25 discussion.

God-level knowledge darts, according to Desus and Mero, are “advice you could base a religion on.” The book, part memoir, part comedic parable, serves as a life guide of lessons the duo learned on Bronx streets since they met in summer school in the 1990s.

Their conversation was indeed a lightning round of spinning darts. Their banter about the Bronx, graffiti, bodegas, and beyond was deftly facilitated by Monk-Payton, who asked them to dive deep into their personal stories and describe how the Bronx had shaped them.

“Every day is a mix of hilariousness and overwhelming tragedy,” Desus said of his younger days in the borough. “You could be having the time of your life, and your good friend is dead. Or you’re chilling with your boys, and next thing you know, you get beat up by the cops. It happens that fast. I remember the last time I got arrested, I was literally just walking with my boys.

“The next thing I know, I’m in bookings. It happens in the blink of an eye, and you have to roll with the punches,” Desus told viewers of the virtual event, part of an ongoing partnership between Fordham University and the Bronx is Reading.

In their book, the two were not afraid to address sensitive issues like therapy and masculinity.

“Men should just cry it out sometimes or go to therapy if you can,” said Mero. He described how difficult it can be for men from Caribbean backgrounds to get the help and support they need. “If you go to a barbershop and you’re like, yo I’m going to go see my therapist, 10 mother-f-ers are like yo, you’re going to wha?!… There’s something wrong with you if you go to therapy.”

In terms of combating the cultural stigma, Mero said, “Sometimes there are ebbs and flows in life. You want to speak to someone who is not going to judge you, someone you can speak frankly to, someone who will give you strategies to cope with whatever you are going through in life. My dad cried all the time. That’s why I never thought crying meant you were soft. If you keep that bottled up inside, you become a human black Air Force One.”

Beyond the difficulties of the Bronx— poverty, policing, and policies— that blighted their experiences, both Desus and Mero expressed overwhelming gratitude to the borough that made them.

“Shout out to everyone in the Bronx. When people see [us], they thank us for representing the Bronx,” said Desus.

As one of the largest institutions in the Bronx, Fordham did not escape their discussion. Both Desus and Mero grew up within walking distance from the University.

“As a kid, I always thought that [Fordham] was the Bronx zoo. I didn’t realize it was in the opposite direction. It had that big gate–and I was like, where are the animals at, what’s going on?” said Desus.

Pugsley’s Pizza and Jubilee—Fordham’s annual alumni reunion event—also received a shout-out from Mero, whose wife is an alumna.

“I used to live around the corner from Fordham, growing up and seeing this gate and wondering what’s that–it’s so mysterious… and then being a grown man and getting access to this for the first time because my wife is an alumna… And thinking, wow, this is a really nice campus…omg…Shout out to Pugsley’s I enjoyed some pizza over there… and jubilee…” He added emphatically, “Go, Rams!”

Bodegas: ‘Lifeblood of the City’

The bodega, central to NYC and the Bronx, plays a big role in Desus and Mero’s story.

“The bodega is the lifeblood of the city,” said Desus.” It’s also where you establish a relationship with Papi, and Papi watches you grow up. He’ll let you get food for free because you left your wallet, and he knows you always come in here, and he’s like you got it next time. Or you can be like, ‘yo Papi, can you hold these house keys for me? I’m going to work, my sister will pick them up,’ and he’s like, ‘yo, no problem.’ If we don’t have bodegas, how would we survive? That’s why we are the Bodegas Boys. They hold us down, so we hold them down.”

There were many questions about God-Level Knowledge Darts’ visual elements from readers in the event chatbox. The inside covers and chapter headings are filled with graffiti. All of the parts written by Mero are done in block letters, a nod to his love for graffiti.

“I love graffiti so much because it’s just a dope way to express yourself. For kids in the hood, it’s like—I was here. I’m here, I matter, I exist. That’s what it was for me as a 13-, 14-year-old kid. Going up and down Tremont Avenue writing my name was like, I’m Mero, I was here. I matter in the giant world that we live in.”

One of the biggest hopes for the book was for it to serve as classroom reading.

“We hope that in 30 years, students have a class based on this book, and students hate us for it,” Desus said, laughing.

For more jokes on cultural politics, favorite memories of the Bronx, and their illustrious career interviewing guests from Nas to the Obamas, listen to the conversation on crowdcast. 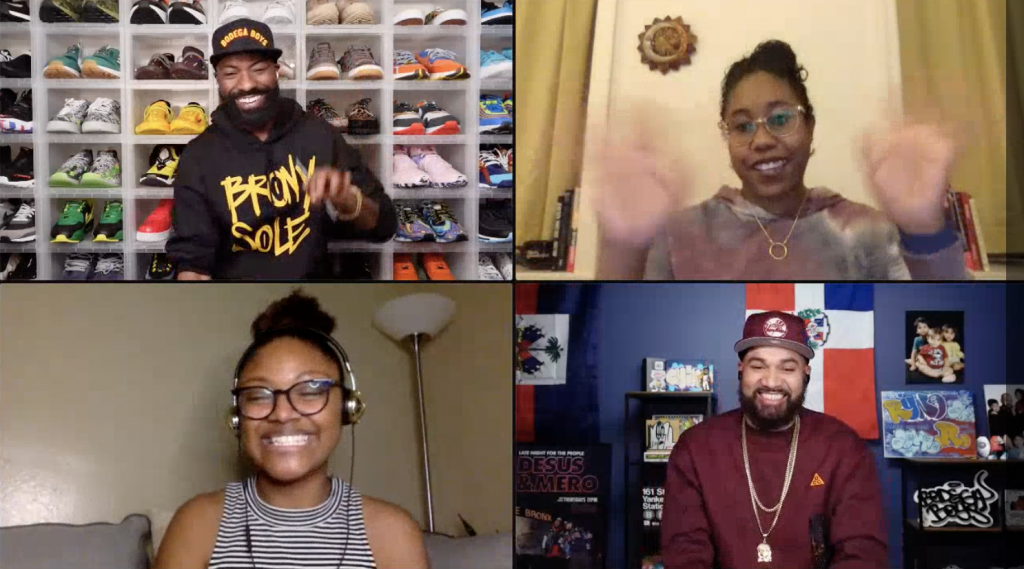 Desus and Mero in conversation with Saraciea Fennell and Brandy Monk-Payton.