skip to main content
Return to Fordham University
You are at:Home»Arts and Culture»Gallery Becomes Respite for the Wandering Spirit

When the upcoming art exhibition Rockslide Skyopens on the Lincoln Center campus on Oct. 1, viewers will see a collection of work inspired by the story of a young poet without a place to call home. 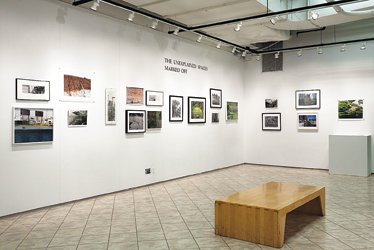 The Push Pin Gallery is being renamed in memory
of Susan Lipani, FCLC ’97, who died the year that
she graduated.
Photo by Daniel Willner

However, a selection of the artwork will be housed in a gallery named in memory of a young woman who found a beloved home in the final years of her too-short life.

The exhibition will be the first to use both the Lowenstein Building’s Center Gallery and the newly renamed Lipani Gallery, located in the Visual Arts Complex on the sublevel of the Lincoln Center campus, and named in honor of the late Susan Lipani, FCLC ’97.

Rockslide Sky was inspired by Roberto Bolaño’s short story “Gomez Palacio,” about a young writer in exile from Pinochet’s Chile. Curator and Fordham artist-in-residence Carleen Sheehan said the show both celebrates the dedication of the new gallery (it was formerly the Push Pin Gallery) and allows the inclusion of large-format work from internationally known artists.

“We are thrilled to have the opportunity to exhibit a wide range of work by critically acclaimed artists, many of whom have had important solo exhibitions in the last year,” Sheehan said.

The show will be the first major exhibition in the Lipani Gallery since it was renamed in honor of Susan.

Joseph Lawton, associate professor and program director of the Visual Arts program, worked with Lipani when she was a student. He said she found her niche in photography.

“She liked it, did well in it, and was talented, ambitious, energetic, as well as a real player in the class in terms of effort,” he said.

Lawton said he learned of Lipani’s cancer, Ewing’s sarcoma, during her senior year. She told him she had run out of treatment options and had just months left.

In the midst of his own shock, he encouraged Susan to use her talent to leave a meaningful legacy for those she loved.

“I told her, ‘Let’s leave something behind for your family. Do a portfolio of your work—your sensibility, your heart, your head.’”

Lawton worked with Lipani during the last weeks of her life to select images, and he finished the portfolio when she was too sick to come to campus.

Since Susan’s death, the Lipani family has established an award to support student study-abroad travel and also a graduation prize honoring Susan’s collaborative and artistic spirit.

Susan’s father, Paul Lipani, said that he and his family were prompted to give to Fordham for a very simple reason—it was a place that Susan had loved deeply.

“I’ll never forget, one time we were driving her back along West 60th Street, and she said, ‘I consider this my home now.’

“Fordham treated her so well. We’ve never forgotten Fordham, nor will we ever for all that they did,” he said.

She said she believed Susan would have been very moved by the naming of a gallery in her honor.