Alumna Suzy Sikorski says her initial interest in the Middle East was rooted in her childhood growing up as a New Yorker in a post 9/11 environment.

“My first exposure to the Middle East was through seeing war-torn images in the newspapers,” says Sikorski, FCRH ‘16. “These images have stuck with me.”

The images, in fact, inspired her to explore the language and culture herself rather than “being swayed by stereotypes.”

Sikorski, who majored in Middle East studies is spending the year abroad on a Fulbright research grant in the United Arab Emirates (UAE), where she is interviewing Emirati artists, working to preserve local artistic traditions, and fostering a greater understanding of local art histories within the community. 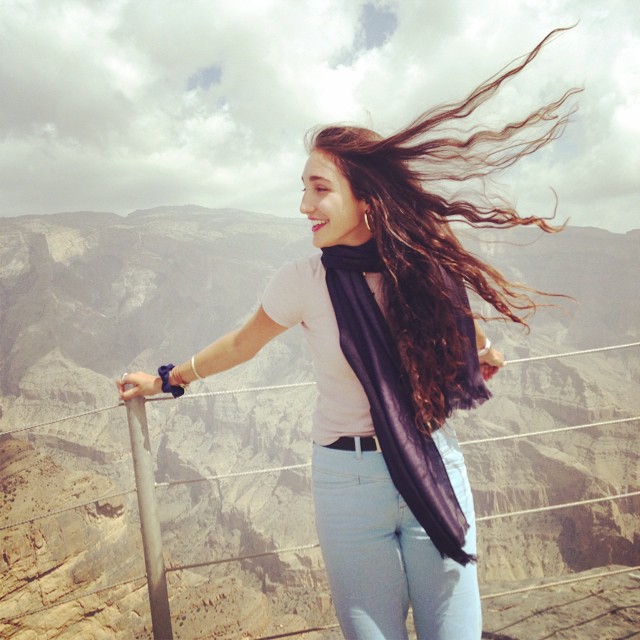 “Emiratis make up about only 10 percent of the nation’s population,” says Sikorski. “So it is important for us to consider their culture, and the UAE’s history, as it relates to the exponential growth of the country.“

To those ends, Sikorski is hoping to revitalize Emirati art in an area that is becoming more and more influenced by Western culture. She says that much of the history of Emirati art is readily available in museums and art schools; it is the lack of mentorship that is the bigger issue.

“I want to give the younger artists reassurance that there is a community of older local artists who are waiting to tell their stories and offer their guidance,” she says.

She has been traveling the country interviewing older and younger Emirati artists, and publishing her interviews on her personal website, mideastart.com and in international and local art journals. She is co-curating an annual exhibition for the Emirates Fine Art Society, the first art society established in the UAE in 1980, which served as one of the only centers for creatives to learn about art and exhibit during that time.

“Just a few months ago, I was writing my senior thesis on these older Emirati artists,” says Sikorski. “Now I have the time to interview them. It’s inspiring to record these artists’ stories.”

Sikorski hopes her work “gives the art a voice to express the Middle Eastern perspective through personal stories,” especially for her family and friends. The Polish-Italian-American daughter of two Fordham graduates (Leonard Sikorski, FCRH ’80 and Bonnie Bilotti-Sikorski, FCRH ’82), Sikorski says her family has been very supportive of her research.

“The most important moments are when my parents share my photos and interviews, as they connect with people back home who are eager to learn more about the region.”

While a Fordham student, Sikorski studied abroad in the American University of Sharjah in the UAE and then in Paris. Through those opportunities she met a wide range of artists, gallery owners, and collectors.

She hopes her interviews nurture the UAE’s art industry and help Emiratis make sense of their own historical narratives. “An awareness of local culture is important for young artists who may be influenced by the internationalization of Dubai. The [artists]need to cherish their identity,” she says.

When her Fulbright is completed, Sikorski hopes to continue interviewing artists and to investigate the rising young talent in the region. Ultimately, she hopes to curate UAE-based and international art exhibitions, so that collectors, students, and other artists realize that “the artwork isn’t only a canvas with a price tag, but also reflects an expression of the people in the community.”

“It’s something I’m truly passionate about—opening doors for Emiratis who are starting to voice their stories to a public eager to learn about them. “

Sikorski is recording her artistic adventures on her Instagram page @mideastart.