skip to main content
Return to Fordham University
You are at:Home»Arts and Culture»From Modern Africa to Renaissance England, Mainstage Season Takes on Extremism

Late one night, Sarah Spring was walking through the subway station at Times Square when bold red letters caught her eye. 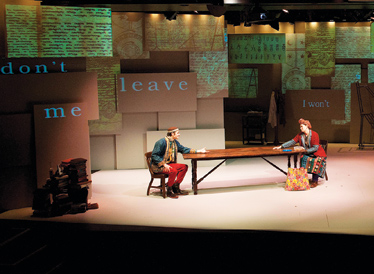 “WARNING,” a sign read, proclaiming that “drunks, liars, homosexuals, and rebellious women” should fear for their salvation.

“It made me so angry that I ripped it off the wall,” said Spring, a senior theater major at Fordham College at Lincoln Center.

For Spring, the sign was one extreme display among many that had been troubling her.

“We can characterize these [signs]as [the work of]crazy people in the subway station saying things, but these thoughts aren’t limited to a subway station in Times Square—they’re buzzing around in the world,” she said.

When Theatre Program Director Matthew Maguire asked for student input on selecting shows for the 2012-13 mainstage season, Spring wrote an essay about her experience in the subway. Her essay contributed to the program’s overall choices of plays that focus on the topic of extremism.

“When we’re choosing a season, we try to listen to the world around us and find the zeitgeist,” she said. “We look for what’s bubbling under the surface of conflicts and the issues going on in the world.”

Each of this season’s four plays deals with a form of extremism. Having already produced Ruth Margraff’s Centaur Battle of San Jacinto and Julia Cho’s The Language Archive, the season continues this spring with Ruined, the 2009 Pulitzer Prize-winning play by Lynn Nottage. The play debuts in the Pope Auditorium on Feb. 21.

Based on interviews that Nottage conducted with Congolese refugees, Ruined follows four women running a bar and brothel in civil war-torn Congo. The women, who have all experienced rape, violence, and subsequent ostracism, are caught in the middle, as their brothel serves both government soldiers and rebel militants. Amid rampant violence and utter lawlessness, their challenge becomes basic survival.

“They’re living on the brink of something—life and death, war and peace, ruin and riches,” said guest director Isis Misdary. “When you’re dealing with basic survival, the luxuries of diplomacy, interpersonal communication, decorum, formalities—all of those structures that order a society—go away. It’s a dog-eat-dog world.”

The Congolese war is also ravaging the land, Misdary said. Much of the conflict stems from disputes over natural resources, particularly mines that supply metals for mobile phones and other electronics.

“In Nottage’s play, we’re witnessing the human cost of buying a cell phone,” Misdary said. “The question becomes, how do we begin to make companies socially responsible for where their raw materials are coming from? Because we’re creating the demand by which corporations are seeking these resources.

The play does not offer concrete solutions to social responsibility or a cure to violence in the Congo. However, it does raise important questions, said Maguire.

“I would hope the audience comes away asking how do we survive when we’re threatened by such extremism? How is it that people’s bonds grow deeper when they’re in that kind of crisis? How can we avoid such crises?”

On the evening of Feb. 22 just prior to the performance, four Fordham professors will hold a panel discussion around the play’s themes, addressing the intersecting issues of sexual violence, human rights, the exploitation of resources in central Africa, and global responsibility.

The mainstage season will close in April with William Shakespeare’s Measure for Measure, the story of a merciless leader who decrees that sex out of wedlock is punishable by death. It is a play that raises questions about empathy and the law, and justice and mercy, said Spring, who will play the lead role of Isabella.

Spring said one thing that audience members can glean from Ruined and the season’s other plays is that radical thinking and actions are not limited to 17th-century England or to wartime Congo; rather, forms of extremism exist on all economic, political, and social levels.

“I hope that the season starts a conversation, and that people will begin to identify extremism in their own lives,” she said.