Produced by L’Atelier Theatre Productions, Les Bonnes (The Maids), which runs through March 19, is based on a provocative 1947 play by French dramatist Jean Genet. It follows two sisters working as chambermaids, Solange (Hélène Godec) and Claire (Laura Lassy Townsend), as they plot an uprising against their master madame (Cloé Xhauflaire). 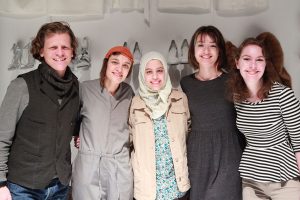 Working with Godec on the poetic Les Bonnes, provided a real-world experience in theater and English/French translation, the students said.

“The most challenging part happens as we run the subtitles when the actors change lines or skip a scene,” said Moustafa. “We start running through the PowerPoint [and]it is literally a mini panic attack trying to match the English subtitles with the actress’ lines in the play. But after the show, we laugh at these moments and we make sure to do our best the following show.”

O’Brien said the fast-paced nature of the play also has its perks.

“My translation skills have gotten infinitely better because I had to think on the spot,” she said.

Through the play’s physical movements and the students’ English subtitles, English-speaking theatergoers are able to immerse themselves in the play’s riveting storyline, the actress said.

“You can watch the performance without understanding every spoken word,” said Godec.

“We don’t approach our roles on a psychologically realistic level. I enjoyed exploring my character in a very visceral way.”