skip to main content
Return to Fordham University
You are at:Home»Arts and Culture»Frederick J. Brown Tribute Fills McGinley Ballroom with Art and Music
Photo by Argenis Apolinario
It may be located squarely in the Bronx, but for a few hours on a recent Saturday night, Fordham’s McGinley Ballroom was transformed to a 1980s SoHo art loft.

The event, 120 Wooster St: A Celebration of the Life and Career of Frederick J. Brown, showcased art, jazz, diversity, and, most of all, a wonderful sense of community and appreciation for the late artist, who was the father of Bentley Brown, GABELLI ’17.

“I have never been an event like this at Fordham—where art, politics, and music are fused together with a huge crowd,” said Mark Naison, Ph.D, professor of African American History and a mentor to Bentley Brown. 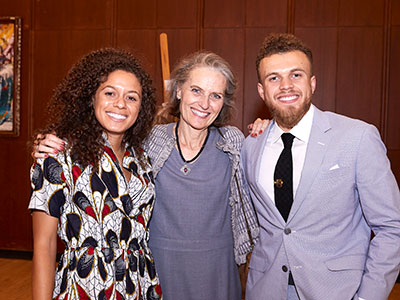 Bentley Brown with his sister, Sebastienne Brown (left), and his mother, Megan Brown

Now a graduate researcher at New York University, the younger Brown said he wanted the evening to showcase the important contributions of his father and other artists of color from that period.

“What I really want people to see is that what black artists were creating in SoHo was a multiculturalist language that goes beyond ideas of race, nation, and so on,” he said.

Brown’s paintings of the early 1970s were large, bold abstractions based on the abstract expressionist tradition of the art department at Southern Illinois University. Brown settled in a loft in SoHo during the New York art renaissance of the 1970s and 1980s. There, he collaborated with jazz musicians like Ornette Coleman and Anthony Braxton.

Attendees learned about the artist’s work and passions through a riveting introduction by poet and activist Felipe Luciano.

“His art was groundbreaking,” he said. “Before Basquiat, before all of them, Fred was doing this stuff. From the abstract, from the spiritual, from the physical, from the cultural, from the sexual, and he put it all together, and it scared some of us. It scared people when Coltrane started his Sheets of Sound. It scares people.”

Luciano said he and Brown would have “huge” debates in the Wooster Street loft about the artist’s need for acceptance by the art class.

“Fred was as American as you can get, a black artist who wanted to be American. I adored him. But he stuck to his vision, his aesthetic. I was not myself convinced he needed to be out there. He tried everything to be validated by this aesthetic league. We would have dinners at his house, and I’d think, ‘Why are we catering to these suckers? You just paint!’

“But Fred knew something I didn’t know, that there a legitimacy in being validated by the art establishment. I would’ve liked to just talk, but I knew I had to get a master’s in order to teach,” Luciano said. “I wrote some of my best poems, watching him paint while listening to the blues.”

Naison said he first learned of the artist when the younger Brown wrote a 153-page senior thesis about his father for a class he was taking with him.

“It fascinated me,” he said. “Bentley, who also was a student worker for the Bronx African American History Project (BAAHP), said why don’t we do a dance concert and art fundraiser for the BAAHP? I thought, What a great idea. I mean, we can always bring great jazz to Fordham but let’s bring visual arts at the same time. And, most important, invite the Bronx community.”

The event drew about 150 people, including students, friends of the artist, and members of the Bronx community. It also provided an opportunity for other students of Naison’s to gain experience in event planning and producing.

“We have a great student staff. I have seven undergraduate research assistants and one graduate assistant who all worked on this. It was a collective effort, but it was Bentley who made this happen.”

Morgan Williams, a Fordham College at Rose Hill senior, attended the event because she is a friend of Brown.

“But I didn’t realize his dad was an artist,” she said. “I knew Bentley was an artist, but now I see where he gets his inspiration from.”

As the Dale Fielder quartet played, the audience was focused on the music. But during breaks, they milled about the McGinley Ballroom. The space was filled with Frederick Brown’s paintings, giving it the feeling of a major art gallery.

As Naison looked around the room filled with students, alumni, friends, and family of the artist, he smiled and said he was proud. He said he’d point to events like this when talking to prospective students about Fordham.