skip to main content
Return to Fordham University
You are at:Home»Arts and Culture»Former Fordham Prof Makes Met Debut Via Vegas 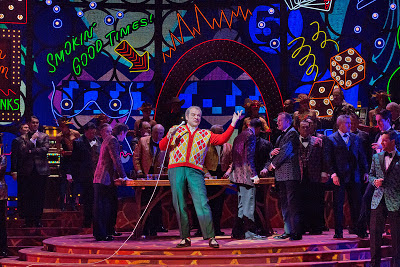 On opening night, it may have struck a few in the Met’s “Penguin section” (the tux-clad patrons of the Dress Circle) as sacrilege, indeed one traditionalist booed the setting in the second act, but Fordham Theatre Program Chair Matthew McGuire said that Mayer’s M.O. isn’t to provoke, but to relate.

“I think he’s always had an iconoclastic approach to the classics,” said Maguire. “He tries to figure out how to relate the material to audiences, often through metaphor.”

Maguire shared an office with the former assistant professor for nearly two years before Mayer left to direct the national tour of Angels in America. He recalled an equally accessible approach to Moliere’s Tartuffe that Mayer directed here at Fordham.

Though not always in an obvious manner, Fordham maintains solid ties to Lincoln Center. There are, of course, official relationships, like the professor exchange between Fordham and Juilliard, such as Bill Baker’s class on the Performing Arts in the 21st Century. And other quietly nurtured programs operate without much fanfare, like PCS’s relationship with the New York City Ballet.

Maguire said he expects the relationship to grow. He has reached out to Rigoletto set designer Christine Jones and hopes to see her teach a class here next fall. For his part, Mayer has been back to Fordham a couple of times as a guest director, and he cast Fordham alumna Frances Mercanti-Anthony, FCLC ’02, in Spring Awakening.

For now, the Fordham community will have to satiate themselves with Mayer’s talent in what promises to be one of the hottest tickets of the Met’s spring season.