Also among their authors are names familiar to the University family. Joseph M. McShane, S.J., president of Fordham, wrote a piece for Thought, the highly respected journal published by the press. His peer-reviewed article examined Georgetown University founder John Carroll, S.J.’s prickly relationship with the ‘philosophes,’ the 18th-century intellectuals who promoted the Enlightenment movement. And several Fordham faculty members have written or edited press titles.

Now, to celebrate Fordham University Press’ rich history and its longstanding collaboration with Fordham Libraries, the two august institutions have honored their joint history with an exhibition at the Walsh Library that is on view through Dec. 20. Titled Veni, Vidi, Legi, meaning “I came, I saw, I read,” the show taps into more than a century of publishing attuned to the national zeitgeist. 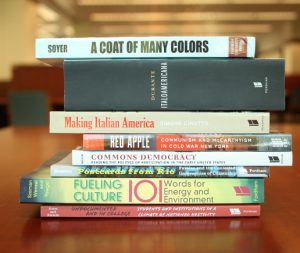 “The press and the library are symbiotic,” said Fredric Nachbaur, director of the press, which was founded in 1907. “We serve a similar audience, and we thought an exhibition would be a great way to expose the press to the wider Fordham community.”

Linda LoSchiavo, director of Fordham Libraries, concurred, noting that both institutions “preserve the past, proclaim the present, and dare to prophesy the future.”

“It is not an accident that this exhibit is taking place in the library,” she said. “The affinity between academic libraries and university presses is inarguable, our goals and our missions are linked to one another as they are to the University itself.”

Nachbaur went further to say that the exhibit based its themes on the mission of Fordham’s Continuous University Strategic Planning (CUSP) effort by addressing how the press and library can help strategize the University’s intellectual future.

“We came up with some themes we thought tied into CUSP, so we had books on immigration, race, diversity, inclusion,” he said. “We have a section of books on New York City, from our Empire State Editions imprint, that’s very, ‘New York is my campus, Fordham is my school.’”

The exhibit highlights the variety of the press’s offerings. Books on LGBT themes sit near a display of books by Fordham faculty, which are not far from books on modern Catholic thought. The sometimes-stark diversity has not gone unnoticed or without controversy over the years, said LoSchiavo. She said it has happened that a book employing queer theory to be taken from a bookshelf by someone who thinks it doesn’t belong in a Catholic university.

“We’d just replace it and put it back up on the shelf,” she said.

Nachbaur credited the late editorial director Helen Tartar for developing the press’ “very strong reputation in religion, philosophy, and literary theory with an emphasis on interdisciplinarity.”

“She acquired some big names like Judith Butler, who is a leading philosopher,” he said. “Before Helen, it was a quieter press and she kind of put it on the map.” 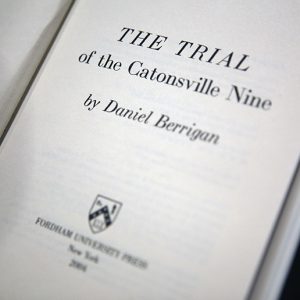 Nachbaur’s background in marketing and sales complemented Tartar’s editorial savvy, he said. The relationships Tartar forged across the global academic community brought intellectual heft to the press, while Nachbaur made it a priority to forge relationships on campus to raise the profile of its publishing program, including establishing books series with the Orthodox Christian Studies Center and the Curran Center for American Catholic Studies that contribute to a legacy that extends to today. One press series, Catholic Practice in North America, examines Catholicism with unflinching viewpoints, often through prisms of gender, race, and sexuality.

“We’ve gotten some pushback, but I have to say that the administration is very supportive of the press; they don’t dictate what we publish,” said Nachbaur. “All of our books are vetted and then they go to a Board of Directors at the press. So, there are many layers of peer review built into the process.”

From admittedly dry medical texts published in 1907 (The Makers of Modern Medicine), to online open access to select titles of today, the exhibition makes it clear that press has its eyes set on the future while honoring its past. The fact that a Catholic institution had a press in the early part of the 20th century was in itself a radical act, said Nachbaur. 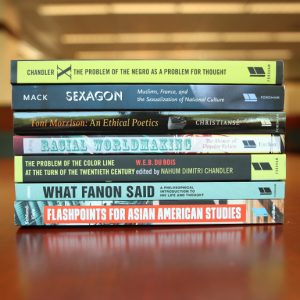 “I’m sure they were pushing boundaries, back then,” he said. “I think it’s really important that a Jesuit institution like Fordham has a press. Because it really ties into cura personalis, educating the whole person, because books obviously, tie into that a lot. And the only other Jesuit university press with a known imprint is Georgetown.”

One distinction, though: Fordham University Press is based in the nation’s publishing capital.

“We’re always beating the New York City pavement, we have access to scholars and talent here, and we’ve hired people from New York who have their finger on the pulse and are hungry for really good intellectual work,” said Nachbaur.

The exhibition runs through Dec. 20 and is pegged to celebrating University Press Week from Nov. 3 through Nov. 9.

“The theme this year is ‘Read, think, act.’ Meaning that November 3rd next year is the 2020 election,” he said. “And how do we deal with the tumultuous times that we find ourselves in? Whether it’s politics, immigration, climate change, or artificial intelligence, university presses are publishing on these exact topics, and all of that is tied that into the exhibition as well.”