skip to main content
Return to Fordham University
You are at:Home»Arts and Culture»Fordham Theatre Raises its Profile 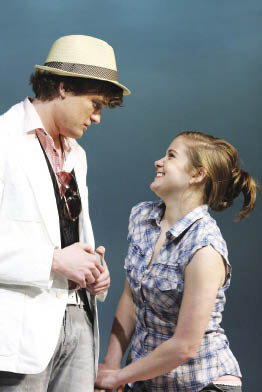 Adam Blodgett and Becca Ballenger in the 2009 production of Cusi Cram’s The Wild Inside. Thanks to Fordham’s collaborations with off-Broadway theaters, Ballenger and Blodgett were able to develop their characters with Cram.
Photo by Gerry Goodstein

Jesuits have been known to drop a name or two in their efforts to build a community of believers. So it is perhaps fitting that, when Matthew Maguire talks about Fordham’s theatre program, the names of Broadway talent shoot forth like a series of showstoppers.

• John Benjamin Hickey (FCLC ’85), the 2011 Tony winner for featured actor in a play, is on tap to give a student workshop, as is Chris Albers (FCLC ’90), an Emmy-winning writer on the former Late Night With Conan O’Brien show.

• Steven Skybell, currently onstage at the Public Theatre in Loves Labors Lost, brings the Bard to Lincoln Center in his course, “Acting Shakespeare.”

Just shy of its 40th year, Fordham’s theatre program continues to strengthen its kinship with the Broadway and New York City theater communities. Blessed with location, location, location, and led by Maguire, a playwright and director and two-time Obie winner, the program has raised its profile in the last five years by hiring more Broadway professionals and fostering new collaborations with off-Broadway houses.

It also has reached farther and deeper to find talented students and advertised its unique niche as a bachelor of arts program with conservatory rigor.

“We are huge believers in the B.A.,” said Maguire. Gesturing to a picture on his wall of the great Sarah Bernhardt, he continued, “One of the greatest actresses of all time said the best training for an actor is to read widely and deeply. How can an actor understand what it is to play a Russian countess unless she has read Tolstoy? By reading, we learn to imagine, to time-travel.” 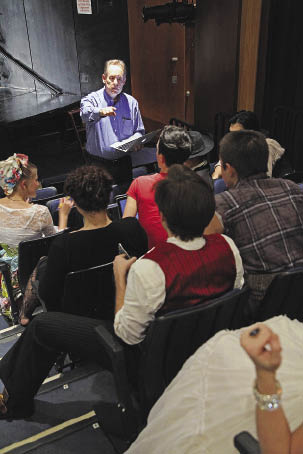 Under the direction of Matthew Maguire, the Fordham theatre program is actively building its reputation.
Photo by Gerry Goodstein

Fordham theatre majors earn 52 credits in the core curriculum—English composition, philosophy and theology, foreign language and math. That core, said Maguire, gives theatre students the tools they need to venture into the remaining 52 required credits in the four tracks of performance, playwriting, directing or design and production.

“The scientific method is teaching students how to excavate reality, and the philosophy curriculum is another discipline about questioning,” Maguire said. “Our art is all about questioning.

“What the Fordham actor gets is the ability to learn to question in many dialects, and it is a great foundation for the young artist.”

Equal numbers of credits don’t make for equal hours, however, Maguire said. Students spend much more time outside of the classroom practicing their craft with what he called “conservatory intensity.” The program produces four plays per year on the mainstage in Pope Auditorium; in the smaller venues of The White Box, Franny’s Space and the Veronica Lally Kehoe Theatre, students mount 20 studio productions a year.

A balance of academics and experience was what drew Becca Ballenger (FCLC ’11) to the program. She was accepted by conservatories. But she wanted more.

“College is four years, so I wanted to go somewhere where my mind would be nourished and I would be taken care of as a person, in addition to getting acting training,” she said.

That core training was put to use when Ballenger got to develop a role from the ground up acting inThe Wild Inside, a 2009 collaborative production between Fordham and Primary Stages. Playwright Cusi Cram worked directly with Ballenger to develop the instincts of her character, Isabel, a woman who was angry at, and in love with, the same person.

“Doing something so brand new is a little bit scary because there is no prior foundation for you,” said Ballenger, who has started her own theater company, LessThanRent. “You can’t research who has played the role before or read essays about this character’s place in the theatrical canon. You really have to create it completely using your own imagination in the text.”

To create such opportunities for Fordham’s students, Maguire has collaborated with the Public Theatre to produce Twenty One Positions, with Primary Stages on The Wild Inside, and with Ensemble Studio Theatre on this season’s For a Barbarian Woman.

The outside companies also benefit from the relationship.

“There are only so many production opportunities that we have in a given year,” said Elliot Fox, managing director of Primary Stages. “We do many more readings and some workshops, but could not possibly present all of the developing work that we would like to each season.

Matthew Maguire (not shown), director of Fordham Theatre, collaborated with the Public Theatre in 2008 to produce Twenty One Positions, a play about the Israeli-Palestinian conflict.
Photo by Gerry Goodstein

“Collaborating with Fordham in such a proactive way is brilliant,” he said. “Not only do playwrights get to see a full production of their work, but both Primary Stages and Fordham have the opportunity to reach a wider audience for their programs and services through cross-marketing and audience-building efforts.”

The Primary Stages connection also led to another first for the program: The New York State Department of Education has just granted approval for the Fordham/Primary Stages master of fine arts in playwriting, to launch next fall.

Another plan in the works is a proposal to strengthen the newest of Fordham Theatre’s four tracks— design and production—by merging resources and curricula with the University’s architecture program.

“Our goal is to be the preeminent undergraduate theatre training program in the country,” he said. “So it isn’t just about finding those students who have acting in their blood memory. It’s also about getting Fordham’s name out there.”