skip to main content
Return to Fordham University
You are at:Home»Arts and Culture»Fordham Student Shows She Can Dance 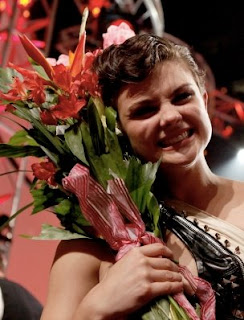 Fordham Lincoln Center campus student Melanie Moore may study art, but at heart she is a dancer.

The freshman visual arts major took first place honors on Thursday, Aug. 11 when she clinched the title of America’s favorite dancer on the Fox channel’s popular show, “So You Think You Can Dance.” The native of Marietta, Ga. won with 47 percent of a four-way vote, with dancer Sasha Malloy coming in as the runner up. Together, they accrued 71 percent of all of the 11.5 million votes cast.

According to the show’s website, Moore received a $250,000 award and will be featured on the cover of Dance Spirit magazine. She also goes on an American dance tour in the fall, reportedly putting her studies on hold.

Moore had seemed like a favorite of the panel of judges for some weeks; she was consistently recognized for her acting ability as well as her dance prowess.

This summer’s contest was judged by a panel that included actress Katie Holmes, producer/choreographer Nigel Lythgoe, ballroom dance champion Mary Murphy and choreographer Kenny Ortega. This summer some five million viewers tuned in to watch and vote for their favorite dancer on the Emmy-award winning show, which is now in its eighth season.

The show auditions young dancers from all over the country; those dancers who are chosen to appear are given the chance to work with top choreographers to learn multiple styles of dance, including hip hop, salsa, quickstep and jive.