Photo by Patrick VerelWith a history that stretches back thousands of years, no country on earth has more UNESCO World Heritage sites than Italy. In cities like Naples, Rome, and Venice, layer upon layer of civilization is palpable to even the naked eye.

New York City, on the other hand, has the Metropolitan Opera, world-class museums, and Shakespeare in the Park. And of course, Rockefeller Center, home of the popular show 30 Rock. 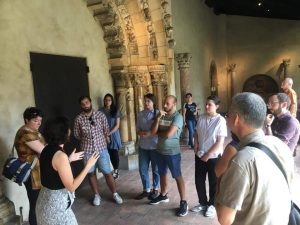 The Cloisters Museum was a must see for the group.

For six Italian exchange students who have been studying at Fordham since August, that’s no small matter. Visits to the Metropolitan Museum of Art have allowed them to take in the ways in which a young country like the United States treats items of antiquity, while living in lower Manhattan has brought pop culture of New York City into sharper focus.

“When you experience things in person, its completely different because you can actually feel the realness of something. It can be a little overwhelming.”

Marilena Simeoni, a native of Avezzano, likewise marveled at how the pace of life in New York is dramatically faster, noting that “every day you have something to do, something to see, to visit.” 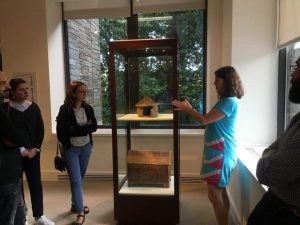 Cataldi, Simeoni and four others studying at Fordham this semester are the inaugural cohort of World Cultural Heritage Studies, a three-year long partnership between Fordham and a consortium of six Italian universities that was signed last year by Fordham president Joseph M. McShane, S.J., and Stephen Freedman, Ph.D., Fordham’s late provost.

Jo Ann Isaak, Ph.D., Fordham’s John L. Marion Chair of Art History and Music, said the goal is to emulate the European Community Action Scheme for the Mobility of University Students  program. Since 1987, ERASMUS, as it is commonly known, has essentially eliminated borders for European students. 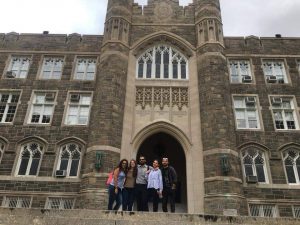 “Every year, students freely come and go to other universities and attend classes and have their classes accredited in their home university. This fluidity is so important,” she said.

“I taught classes in Italian universities, and in my classes, I would have students from all over, not just Italian students. So, it’s very familiar for me, and I can clearly see its advantages for American students. We are a little isolated in America, it is good to see how things are done in another country.” 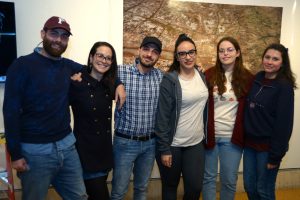 The Italian students worked alongside their American counterparts to put on an exhibition, Art for Arctic’s Sake, at the Ildiko Butler Gallery.

In August, the Italian exchange students along with Fordham graduates were treated to a two-week long immersion course that included trips to major landmarks and sites like Belmont’s Little Italy. Other Fordham students have also taken them on more informal outings, including one to Governor’s Island.

Simeoni said the Cloisters Museum impressed her because the displays there showed a level of attention to medieval objects that is often lacking in Italy. A visit to the African Burial Ground National Monument in lower Manhattan was also particularly moving, she said.

“It was very shocking, seeing it. We study these things in Italy, but it seems far. Here, I can perceive so much, and see how American people try to remember history in the right way,” she said.

“It’s a difficult thing, because telling history is difficult, and it should be done in the most objective way. I saw that here.”

The students have been living at College Italia’s H2CU Residence, a complex of 15 apartments on Rector Street owned by a consortium of Italian universities, since August.

The students in Isaak’s class worked alongside their American counterparts to put on an exhibition as well, Art for Arctic’s Sake, at the Ildiko Butler Gallery on the Lincoln Center campus. At the show’s opening on Nov. 7, students who’d organized the exhibition, the show’s post card, posters, website, and written the catalogue essays, greeted visitors while wearing buttons that said “Ask me about the art.”

As part of the exchange, Fordham graduate students will have the opportunity to study for a term in Italy. Isaak encouraged students interested in courses such as Everyday Life in Pompeii, Philosophy of Science and Medicine, Novels as Travel Guides, and Magic in the Middle Ages in Italy to consult with their advisors and the dean’s office of the Graduate School of Arts and Sciences.

“The Italian graduate students have been really fantastic to have in my class, and I’ve been happy with the ways our own students have taken on the role of host and introduced them to New York,” Isaak said.