skip to main content
Return to Fordham University
You are at:Home»Arts and Culture»Fordham Salutes First Lady of Rams Football Bestselling author Mary Higgins Clark, FCLC ’79 (left), and Ann Mara pose with the Lombardi Trophy at the 2012 Fordham Football Dinner, where Mara was honored with the Walsh Award, in recognition of her support for Fordham football. Photo by Tim Schulteis

And on April 27, at the annual Fordham Football Dinner, Ann Mara was again presented with an award bearing the name of a Fordham alumnus: the Walsh Award, named for William D. Walsh, FCRH ’52, and given each year to an individual who best exemplifies the support, loyalty, and passion for Fordham football.

Ann Mara’s connection to Fordham football dates back to the 1930s, when her future husband, Wellington, a classmate of Vince Lombardi, would bring her to University sporting events.

“During our courtship, he dragged me to every football game and every basketball game,” she said as she accepted the Walsh Award in the Grand Salon of the Jumeirah Essex House on Central Park South. “That was his idea of a romantic night.”

The Mara family’s ties to the University are numerous: John Mara, the Giants’ president and CEO, is a 1979 graduate of Fordham Law School; several of Ann’s grandchildren attended the University; and Ann herself was awarded an honorary doctorate in 2008. 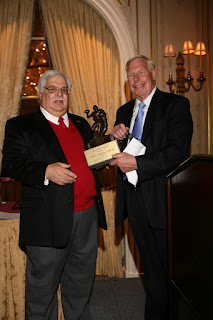 Dan Somma, GSB ’66, the recipient of the 2012 Mara Family Award, was instrumental in reviving football as a club sport at Fordham in the 1960s and also helped found the Gridiron Club in the 1970s. He recalled before the dinner began how Wellington Mara had donated equipment and weights from the Giants organization for the Fordham club team to use.

“I actually live in the same town as the Maras,” said Rye resident Soma, who called Mara an icon of Fordham, the Giants, and New York City. “It’s been wonderful [how they’ve backed]Fordham football.”

Frank McLaughlin, FCRH ’69, Fordham’s executive director of athletics, introduced Ann Mara and recalled how when the University wanted to honor the famous Seven Blocks of Granite and the 125th anniversary of Fordham football several years back, he phoned John Mara to ask if he’d support the project financially.

“John was a little hesitant,” recalled McLaughlin. “He said, ‘Frank, you don’t seem to understand, I’ve gotta get my mother’s approval.’” (Quipped Ann from her table: “And he still does.”) Continued McLaughlin: “The Maras have always had class, always had dignity, and great love for Fordham. They’re a super family that deserves to be Super Bowl champions.”

Attendees at the dinner, emceed by Connell McShane, FCRH ’99, of Imus in the Morning, included former Rams quarterback and current member of the Arizona Cardinals, John Skelton, GSB ’10, as well as author Mary Higgins Clark, FCLC ’79, who’s been friends with Ann Mara for some 20 years and is a regular in Ann’s box at the Meadowlands. “There is no one in the world who deserves recognition more than she does,” said Higgins Clark after the dinner concluded.

Mere blocks away from the Jumeirah Essex House, the NFL was holding the second night of the 2012 Draft at Radio City Music Hall. And Mara—the matriarch of the Giants organization—said before the dinner began that she intended to keep tabs on the proceedings. “I brought my phone,” she said with a laugh. “I’m gonna keep calling the office.”

Indeed, even as she was being honored for her support of Fordham football, Ann Mara’s beloved Giants were never far from her mind. After this year’s NFC Championship game in San Francisco, she famously gave Fox broadcaster Terry Bradshaw an earful for picking against the team. The clip of the trophy presentation turned Mara into something of an Internet sensation, and she joked about that moment while accepting the Walsh Award.

“I can’t thank Fordham enough,” said Mara. “It’s just been wonderful to receive this. I’m only sorry that Terry Bradshaw isn’t here to present it to me.”