skip to main content
Return to Fordham University
You are at:Home»Arts and Culture»Professor Featured in New Documentary on Romance Publishing

Fordham English professor Mary Bly, PhD, will get her silver screen close-up next week when Love Between the Covers, a documentary about the romance publishing industry, is screened at this year’s New York Documentary film festival.

The festival opened Nov 12 and Love Between the Covers will be shown on the festival’s final day, Thursday Nov. 19, at the IFC Center in Greenwich Village.

Bly, who writes romantic fiction under the pen name Eloisa James, is one of five published authors and one aspiring writer who director Laurie Kahn filmed over a three-year period.

The film focuses on a genre that has books sold in 34 languages on six continents and grosses more than a billion dollars a year—more than mystery, sci fi, and fantasy combined. In spite of this financial clout, Bly said the millions of women who read, write, and love romance novels have historically been invisible, which makes the film especially important.

“A big part of [the film]is about [our]readers. There’s a scene where a bunch of readers are sitting around and one of them says ‘When I was a kid, I was diagnosed with bone cancer, and you just have to read something that makes you realize that even if you’re not going to have a happy ending, someone else will,’” she said. 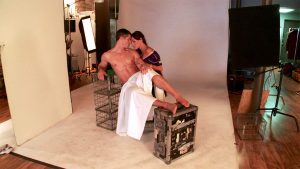 Behind the scenes at a photo cover shoot. Photo courtesy Blueberry Hill Productions.

The film shows Bly teaching a class at Fordham, and meeting with marketing executives at Harper Collins as well as with fans at conferences and book signings. Bly said the film taught her a lot about Eloisa James’ contemporaries, including a lesbian writer and an African-American writer who specializes in historical fiction. (The writer is filmed taking a group of readers to a slave auction site.)

To tell a visual story about an industry built on the written word, the documentary features clips from early romantic films. It also shows the process of making a book cover, both by a professional studio and by a self-published author who recruits her mother and friends for a DIY photo shoot.

One of the themes that Bly said the film showcases is that meritocracy is baked into the genre’s DNA. For starters, there’s a robust support network available for anyone who wants to write his or her own romantic fiction.

“You can be Nora Roberts. Jonathan Franzen, that’s a different story. We’re meant to bow at the feet of [literary]authors, and to some extent, I’m all over that. I’m a Shakespeare professor.

“I think there is a huge difference between literature and genre fiction,” she said. “I happen to love both of them. I think they both have an strong and interesting place in life, and should be respected on both sides.” 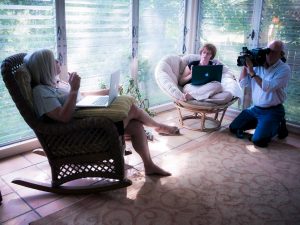 It’s also fun to write, she said, because unlike literary writers, one need not worry that their work will be torn apart in the New York Times Review of Books.

“Of literature, critics might say you’re a has been who’s writing the same thing over and over, whereas my readers are saying ‘We want that again,’” she said.

One of the reasons romantic fiction is overlooked by the general public is sexism; Bly noted that if genre romance was a male-dominated billion-dollar industry, a documentary would have been made by now. But the other reason, she said, is romance’s ephemeral nature.

“It might change your life, it might make you happier, but it’s not Catch 22. It’s not going to change the way we think about war,” she said.