The society announced the award winners in this year’s category, “The Humanities,” on Oct. 3. The winners include Structure and the Metaphysics of Mind: How Hylomorphism Solves the Mind-Body Problem (Oxford University Press, 2016), by William Jaworski, Ph.D., associate professor of philosophy, and Christianity, Democracy, and the Shadow of Constantine (Fordham University Press, 2016), co-edited by George E. Demacopoulos, Ph.D., and Aristotle Papanikolaou, Ph.D., professors of theology and co-directors of the Orthodox Christian Studies Center. 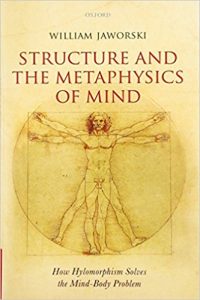 Jaworski said his book is about mind-body problems, which are persistent problems understanding how consciousness can exist in a world that a fundamental level isn’t conscious.

“When we look at physics,” he said, “it doesn’t talk about conscious states. So how can we be conscious beings if we’re made out of physical stuff that isn’t? Philosophers and scientists have been puzzling over this for centuries.”

Jaworski argues that hylomorphism, a theory that originated with Aristotle, can solve mind-body problems. Hylomorphism claims that living things like people are not simply collections of physical materials; they are individuals composed of physical materials with a particular organization or structure. That structure gives living things powers that unstructured materials don’t have, including the power to have conscious thoughts and feelings.

“Hylomorphism was largely abandoned for hundreds of years,” Jaworski said, “but recently it’s been making a comeback. I’m happy to be part of that, and I’m honored to represent the University vis a vis the broader community of Jesuit institutions.”

He said his current research aims at applying hylomorphism to artificial intelligence.

Using the Church to Divide East from West 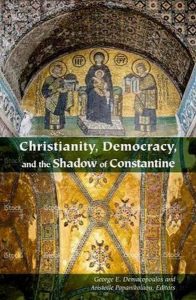 Demacopoulos and Papanikolaou’s book examines Catholic and Orthodox Christianities’ influence on politics. The book includes several critiques on the influence of Western liberalism in the Orthodox East. Essays examine how some governments attempt to use that influence to divide the religions for geopolitical purposes.

“It’s not completely unprecedented, but it’s rare that this kind of award would go to an edited volume rather than a monograph,” said Demacopoulos, the Fr. John Meyendorff & Patterson Family Chair of Orthodox Christian Studies. “I think the judges recognize the significance of this kind of endeavor.”

Demacopoulos said most books that examine Christianity and the political world do so through the lens of Catholic and/or Protestant thought. Their book charts new ground in theological studies by bringing the history of the Orthodox experience into the conversation.

According to Papanikolaou, the Archbishop Demetrios Chair in Orthodox Theology and Culture, the book attempts to cut through much of the “identity construction” that occurred in Eastern Europe after the collapse of communism. The new order forced traditionally Eastern Orthodox countries to grapple with the relationship between Christianity and liberal democracy.

In the book, Catholic, Protestant, and Orthodox theologians reflect on the post-communist Orthodox world and on Western political theology.

“It offers conversation on all these different points of view,” said Papanikolaou. “While there are a lot of Orthodox Christians that are troubled by liberalism, that doesn’t mean the church should be used in the way of a political divide.”

The subject will be further explored at Nov. 1 at the Lincoln Center campus in a panel discussion titled, “Trump, Putin and Traditional Values.”

The Alpha Sigma Nu Book Awards are given annually to outstanding publishing contributions by faculty and administrators at Jesuit colleges and universities. It is co-sponsored by the Association of Jesuit Colleges and Universities (https://www.alphasigmanu.org/awards/asn-book-awards/winners)