skip to main content
Return to Fordham University
You are at:Home»Arts and Culture»Fordham Community to be Turned “Inside Out” by Artist J.R.

This week the massive concrete wall that runs along the south side Fordham’s Lincoln Center campus will be transformed into a surface of smiling, smirking, and silly faces as Inside Out, a global art project that “transforms messages of personal identity into works of art,” sets up shop.

Inside Out is the creation of J.R., a former graffiti artist from Paris who became famous for wheat pasting images of human faces on massive canvasses around the world. He was awarded the 2011 TED Prize, which came with $100,000 meant to fund the winner’s “wish to change the world.”

That wish, he explained in his acceptance speech, was to “stand up for what you care about by participating in a global art project, and together we’ll turn the world inside out.” 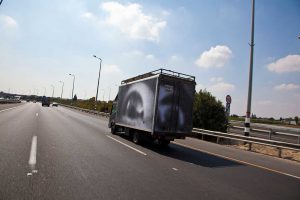 The photo booth truck, en route to Jerusalem in 2011

The premise is simple. On Wednesday, March 25, from 11 a.m. to 4 p.m., the Inside Out team will park a customized truck with a photo booth on West 60th Street, and anyone can step inside and have their picture taken. A large black and white copy will immediately be printed on paper, and volunteers from Fordham and Inside Out will paste the copies along the wall.

Rhea Keller, Inside Out’s manager, said the team typically takes up to 30 pictures an hour, so they could end up with 100 portraits or more—all of which will stay up until the elements eventually take their toll on them. The event is open to literally anyone nearby.

“We believe that the Fordham community is the students and the faculty, but also the people who live in neighborhood,” she said.

“We’re not going to turn away anyone until we have to close shop. Part of the whole experience is just seeing who comes by and what kind of installation that creates at the end of the day.”

The team did a similar “photo booth action” in 2013 in Times Square, when it took 6,000 portraits over a three-week period and pasted the photos on the ground of Father Duffy Square. Photos have also been posted in North Dakota, Tunisia, the South Bronx, Tanzania, and the North Pole.

J.R. was invited to be this year’s Urban Studies “Distinguished Visitor” as part of the program’s focus this year on urban arts, which has included visits by filmmaker Andrew Padilla and a screening of his film “El Barrio Tours,” and co-sponsorship of the “Law, Space, and Artistic Expression” conference. The visitor series is funded through a grant by the firm Podell, Schwartz, Schechter & Banfield, of which Bill Banfield is a 1974 graduate of Fordham College at Rose Hill.

“J.R.’s project highlights urban art and public space and the ways in which the city acts as a collective canvas,” she said.

As for what the portraits can do, J.R. noted in his TED talk that art is not supposed to change the world in practical ways, but to change the perceptions.

“Art can change the way we see the world. Art can create a new energy. The fact that art cannot change things [in practical ways]makes it a neutral place for exchanges and discussions. And then change the world,” he said.

“What we see changes who we are. When we act together, the whole thing is much more than the sum of the parts. I hope that together we will create something that the whole world will remember.”