skip to main content
Return to Fordham University
You are at:Home»Arts and Culture»Fordham, as Seen From the Archives
William Fox was a freelance photographer who worked in the 1930s and 40s for Fordham during the Robert Gannon, S.J. administration, for upwards of 20 years. He left all his negatives and photographs to Fordham’s library decades ago–coverage of commencements, campus architecture, student life, and more. His most famous photos are arguably the Lombardi, Seven Blocks of Granite photos.
But some of the lesser-known works will be on display starting tomorrow in the Ildiko Butler Gallery on Fordham’s Lincoln Center campus.
From the Archives: Photographs by William Fox from the Fordham University Archives and Special Collections
Curator: Stephan Apicella-Hitchcock
The Ildiko Butler Gallery
Fordham University at Lincoln Center
113 West 60th Street at Columbus Avenue
New York, NY 10023
Exhibition dates: June 6 – July 18, 2014
Website: http://fordhamuniversitygalleries.com
The images that Apicella-Hitchcock has chosen to display were all created between the years of 1940 and 1941.
University archivist Patrice Kane said that most of the photos and negatives were stored in the archives in the administration building basement until the archives were relocated in the 1990s in the new Walsh Library. Most of them, which Fox stored in the original glassine envelopes, survived and are intact; however, for some years the negative emulsion, some of which was of unstable material and experienced  some fluctuations in temperature and humidity, have tended to “separate and bubble,” she said. Kane’s office transferred them to archival housing in the new Walsh Library.
The exhibit, according to Apicella-Hitchcock,represents “the beginnings of Fordham University’s self-awareness, from a publicity and photographic point of view.” Those that were chosen display some of the slightly-flawed negatives (like the image below of Duane Library). The fissures and patterns create an eerie dimension to the images, which Apicella-Hitchcock hopes “intentionally highlight the flaws of the analog process for their mystery and visual beauty, in contrast to our digital age of precision and perfection.” 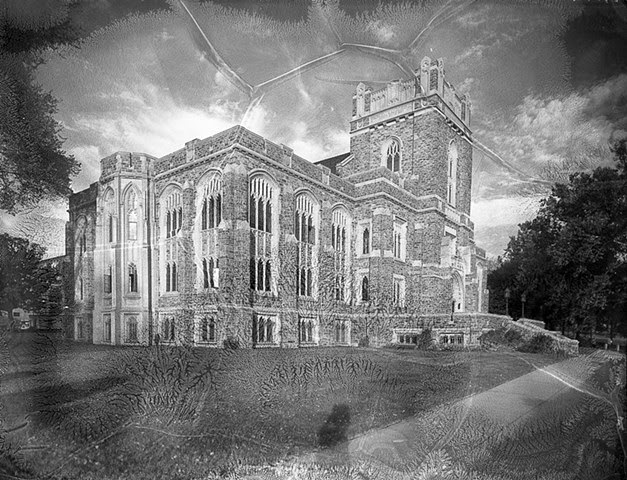