skip to main content
Return to Fordham University
You are at:Home»Arts and Culture»Fordham Alumnus Named President of Renowned Cancer Center

Ronald A. DePinho, M.D., a 1977 alumnus of Fordham College at Rose Hill, has been named the sole finalist to become the next president of the MD Anderson Cancer Center, the University of Texas System Board of Regents announced on May 11. 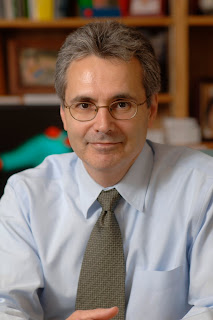 “Doctor DePinho is a distinguished scientist and proven administrator capable of leading the nation’s premiere comprehensive cancer center,” said Gene Powell, chairman of board of regents. “He has an excellent background in teaching and research and a demonstrated ability to work effectively within complex medical institutions. The board is extremely confident he has the ability to advance the institution’s mission ‘to make cancer history.’”

The son of Portuguese immigrants, DePinho earned his bachelor’s degree in biological sciences at Fordham College at Rose Hill, with a minor in art history, before earning his medical degree with distinction in microbiology and immunology at the Albert Einstein College of Medicine, where he later served as a member of the college’s faculty.

A renowned cancer geneticist, DePinho is currently director of the Belfer Institute for Applied Cancer Science at the Dana-Farber Cancer Center and professor of medicine (genetics) at Harvard Medical School. He is a member of the Institute of Medicine of the National Academies and a fellow of the American Academy of Arts and Sciences.

DePinho’s focus includes the fields of cancer research, aging and chronic degenerative diseases. He is a leader in using lab mice as a model of human disease, genetically manipulating and engineering the mice to understand the molecular underpinnings of complex human disorders, most notably cancer and aging.

In 2002, DePinho received the 43rd Clowes Memorial Award from the American Association of Cancer Research, in recognition of outstanding accomplishments in research.

More recently, he appeared on The Colbert Report to discuss his research of reverse aging in mice.

Once officially approved by the board, DePinho will become the fourth president in MD Anderson’s 70-year history.

“This is what makes this country great,” DePinho told the Houston Chronicle, “that the son of uneducated Portuguese immigrants could become president of the nation’s premier cancer center.”

DePinho was profiled in the fall 2003 issue of FORDHAM magazine.