skip to main content
Return to Fordham University
You are at:Home»Arts and Culture»Fordham Alumni Experience the Music and Culture of Cuba
A couple of Fordham alumni atop Fusterlandia, a public art installation wonderland by local artist José Fuster. Photos by Mark Naison, Melissa Castillo Planas, and Rafael Zapata
A group of Fordham alumni traveled to the Caribbean for a music-focused tour of Cuba in late March. Joined by Fordham faculty and administrators, the group saw live music performances, dropped in on dance classes, visited a cigar factory, and explored the farming town of Viñales.

The trip was co-led by Mark Naison, Ph.D., professor of history and African American history.

In the 48 years Naison has taught at Fordham, music has played a large part in the way he teaches history. So it should come as no surprise that he helped develop a tour to explore the musical traditions of Cuba. 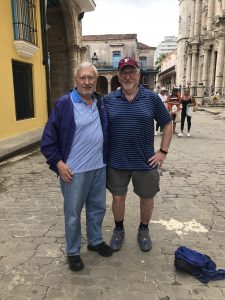 The idea for the trip, offered through the Office of Alumni Relations travel program, came about after Naison went on a guided tour of Cuba in 2017 and left wanting to know more about the Afro-Cuban music he heard on the streets. He worked with Shannon Hirrel Quinn, associate director of Alumni Relations, to make the “Exploring Havana’s Music and Afro-Cuban Traditions” trip a reality.

“The result was everything I dreamed of exploring and experiencing,” said Naison.