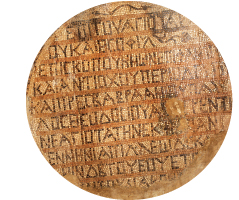 Fordham University has acquired its first Christian artifacts from antiquity: nine mosaics from a church built in the fifth century, a time when Christian art was still inflected with pagan images and the cross had yet to become the dominant symbol of the faith.

The mosaics formed part of a church floor located in what is now northwest Syria. An anonymous donor gave them to Fordham’s Museum of Greek, Etruscan and Roman Art in December, expanding the historical sweep of a collection that was already the largest of its type among universities in the New York region.

“They’re evidence of very, very early Christianity in the Levant and the eastern Mediterranean, so they’re exciting for that,” said Jennifer Udell, Ph.D., curator of university art. “It certainly is proof of an established religion gaining hold, and being an important enough religion to engender building projects with beautiful mosaics. We didn’t have anything like them so they’ve really increased the scope of our holdings.” 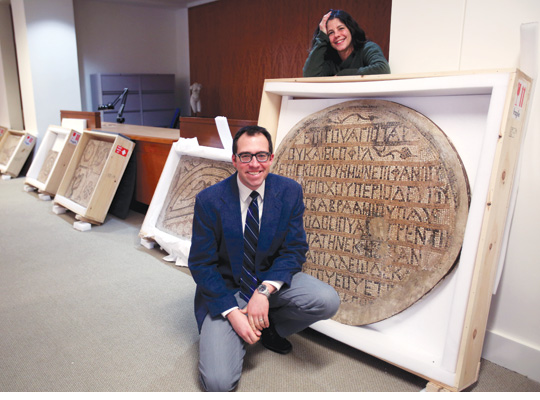 Located at Fordham’s Rose Hill campus, the Museum of Greek, Etruscan and Roman Art already contains more than 260 objects, dating from the 10th century B.C. through the third century A.D., that illustrate the material culture of the ancient Mediterranean region.

The nine new pieces, with their pictures and inscriptions, offer a window into a transitional time in the church. Seven of the mosaics show animals or geometric shapes, making them typical of a period in which church floors generally featured things like flora and fauna or sunbursts, said Michael Peppard, Ph.D., assistant professor of theology. Generally absent are images of Christ, the cross, or human figures.

“One thing they clearly are emphasizing is the idea of new creation and paradise,” he said. “There’s that sense of, Christians are a new creation, they’re newly born, they’re inhabiting this Garden of Eden again, and that comes out pretty strongly.”

Udell noted that one of the mosaics shows a peacock, “which early on became a symbol of the resurrection.” In an example of how motifs crossed religious boundaries at the time, she said, the peacock image was also popular in synagogues.

“Religious art still [was]sort of adopting motifs from the Greco-Roman world, which was all pagan in the eyes of the Christians,” she said. “So you’re looking at objects that are harnessing a visual language that was familiar to the population at the time. It makes a lot of sense that the early church fathers and early leaders of Christianity would want to appeal to the broader population by using familiar visual imagery.”

The other two mosaics are inscribed with valuable information, Peppard said: the names of four church officials, the name of the benefactor who paid for the church’s construction, and the date it was built. (That would be the month of Apellaios in the 775th year following the region’s conquest by Alexander the Great, equivalent to December of 463 A.D.)

The name of the bishop cited in the mosaics, Epiphanius, was common at the time but probably denotes Epiphanius, bishop of Apamea in the 450s and 460s. Peppard and Udell are conducting research to answer this and other questions about the mosaics.

The text also mentions another official, the periodeutês—a kind of auxiliary bishop—who provided pastoral care for rural churches in Syria at the time, according to Peppard. It’s an office that was prominent for a few hundred years before fading away, although its name is still used by modern-day Maronite Catholics, he said.

“[In these mosaics] we have kind of everything you want as a historian,” he said. “We have five proper names and a date, and those things are not to be taken for granted in history.”

In light of the present civil conflict in Syria and legitimate concerns for the security of that country’s ancient archaeological sites and artifacts, it should be noted that the recent gift to Fordham of the nine mosaics described in the above article was accepted following a thorough provenance review in accordance with University policy and careful examination of accompanying, official documentation attesting to the mosaics’ legal export to the United States in 1972.

Eyewitness testimony and other evidence further point to their excavation no later than 1968. A forthcoming article in the Zeitschrift für Papyrologie und Epigraphik (Journal for Papyrology and Epigraphy) by Fordham theology professor Michael Peppard, Ph.D., and a future article by Jennifer Udell, Ph.D., curator of University art, will offer thorough examinations of the mosaics’ ancient and modern histories.