After the exhibit closed in February, the reproduction was carefully taken down and packed away. In November, it was given a new home in Fordham’s Butler Commons on the Rose Hill campus.

Joseph M. McShane, S.J., president of Fordham, called the gift a welcome addition to the University’s collection, one that will “touch our hearts, engage our minds, and lift our spirits.” 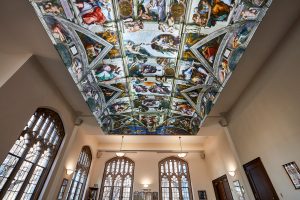 One of the most famous paintings in the world, the fresco includes works such as The Creation of Adam, seen here in the quarter-scale reproduction. Photo by Argenis Apolinario

“It is an honor to once again partner with the Met, one of New York City’s preeminent cultural institutions, and to provide a permanent home to a reproduction of Michelangelo’s most ambitious and stirring masterpiece,” he said.

“Such a work embodies the divine grace of God. Its presence will remind us of our own Catholic heritage.”

The fresco, which Michelangelo painted between 1508 and 1512 at the behest of Pope Julius II, is one of the most famous pieces of art in the world. Among its features are narrative scenes from the Book of Genesis, the Book of Maccabees, and the Gospel of Matthew. One of its most iconic images is the artist’s rendition of The Creation of Adam.

The gift is emblematic of both the Met’s and Fordham’s extensive roots in New York City. Father McShane first saw the fresco during an early morning tour of the exhibit arranged by Fordham Trustee Fellow Edward M. Stroz, GABELLI ’79, and his wife Sally Spooner. They were joined by Erin Pick, then a senior administrator at the Met, and Maria Ruvoldt, Ph.D., chair of the department of art history at Fordham.

The fresco, which took Michelangelo four years to paint, tells the story of Genesis. Reproduction photo by Argenis Apolinario

He said he knew from the moment he entered the room that it would be a magnificent addition to Fordham’s campus. As chance would have it, the group crossed paths with Carmen Bambach, Ph.D., a curator at the Met who specializes in Italian Renaissance art. From 1989 to 1995, Bambach was also an assistant professor of art and music history at Fordham when Father McShane was dean of Fordham College at Rose Hill.

“She looked at me and said, ‘You hired me at Fordham.’ I smiled and said that I had indeed hired her,” Father McShane said.

“After the tour was over, Erin, Carmen, and Maria worked on a proposal that we could place before the Met leadership to see if we could secure the piece for Fordham. Much to my surprise, we were informed a few weeks later that the Met approved our proposal.”

Quincy Houghton, deputy director for exhibitions at the Met, echoed the bond between the museum and Fordham.

“We are pleased that this painting will have a future life at Fordham, as another manifestation of the many scholarly connections between our two institutions, and that it will be widely used as a teaching tool,” he said.

“We look forward to seeing it in its new home.” 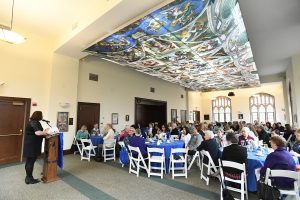 Butler Commons, which is named for the founder of Marymount College, is often used for meetings by the college’s alumnae.
Photo by Chris Taggart

Ruvoldt said that although the fresco is among the most famous paintings in the world, it’s often seen in piecemeal fashion, such as the well-known section featuring the nearly touching hands in The Creation of Adam.

“Typically, when students learn about this in an art history classroom, they’re seeing a projection on the wall. They don’t have the experience of the entirety of the composition, and the experience, frankly, of just looking up at it, which sounds a little simple, but was key to the way the painting was meant to be understood,” she said.

Among the details one can observe in the full reproduction is evidence that Michelangelo actually realized, halfway through the production, that he’d have to rethink his approach. Ruvoldt said the latter sections feature visible changes in the scale of the figures, and compositions become simpler, so they’re more discernible from below.

Watch Ruvoldt give a guided explanation of the fresco reproduction.

Butler Commons, which is named for the founder of Marymount College and is just one floor above the University’s theology department, is an ideal location for it, she said, because it’s open to all. The University will open it to members of the campus community in January, and members of the public can arrange visits in the same manner they currently use to visit the University’s Museum of Greek, Etruscan, and Roman Art.

“I picture it as something that not only art history professors can bring students in to look at it, but the theology department as well. The subject matter is the entire story of Genesis, the prophets, and the ancestors of Christ—it could be interesting as well for interdisciplinary investigation.”

Update: While Butler Commons will remain secured, any member of the Fordham community who wishes to view the reproduction can contact the reception desk at Tognino Hall during business hours to have them open the room. During the weekends and after business hours, Public Safety will respond and open the room for any requested viewing. Members of the public can also make arrangements to view the artwork during business hours. No food or beverages are permitted in Butler Commons.