skip to main content
Return to Fordham University
You are at:Home»Arts and Culture»Five Must-See Tony®-Nominated Performances 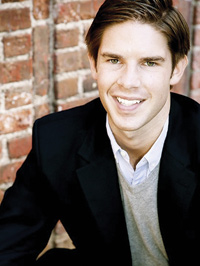 Law, Frank DiLella, FCLC ’06.
DiLella will be co-hosting
the official Tony Awards
pre-show—you can see
him live from the red carpet on
Sunday, June 9 at 6 p.m. on NY1
or at www.TonyAwards.com
Photo by Chris Shinn

Frank DiLella, FCLC ’06, is the theater reporter for NY1 News in New York City and a contributing correspondent for PLAYBILL. A communications major, DiLella taught a course on theatre journalism to undergraduates at Fordham’s Lincoln Center campus during the spring semester.

Bertie Carvel – Miss Trunchbull in Matilda(www.matildathemusical.com). Carvel takes gender-bending to a whole new level with his portrayal of the evil headmistress, Miss Trunchbull, in Broadway’s latest smash-hit musicalMatilda. Carvel won the 2012 Olivier Award for creating the character for the Roald Dahl musical in the United Kingdom. He’s currently reprising that performance eight times a week on this side of the pond at the Shubert Theatre. Expect to see this Broadway newbie walk home with a Tony® statue.

Nathan Lane – Chauncey in The Nance(www.lct.org). Two-time Tony® Award winner Nathan Lane (The Producers and A Funny Thing Happened on the Way to the Forum) returns to Broadway this season in Douglas Carter Beane’s new work, The Nance. Lane plays a gay burlesque performer struggling with the realities of homosexuality in New York City in the late 1930s. This performance marks the first Tony® nomination for Lane since his celebrated run in The Producers back in 2001. Lane will inevitably make you shed a tear or two while tickling your funny bone.

Kristine Nielsen – Sonia in Vanya and Sonia and Masha and Spike (www.vanyasoniamashaspike.com). After successful runs at the McCarter Theater in Princeton, N.J., and off-Broadway at Lincoln Center, Christopher Durang’s latest comedy Vanya and Sonia and Masha and Spike has made it to the Main Stem. The play features Durang alums Sigourney Weaver, David Hyde Pierce, and Kristine Nielsen as siblings named after classic Chekhov characters. While Pierce and Weaver may add star wattage to the show’s marquis, it is Broadway veteran Kristine Nielsen who gives the performance of the evening; a comedic and heart-wrenching turn that is not to be missed! And when you attend Vanya at the John Golden Theatre, take an extra-close look at the group of names above the title on the poster. John Johnson, FCLC ’02, serves as one of the show’s producers and is responsible for helping move the play to Broadway.

Patina Miller – The Leading Player in Pippin (www.pippinthemusical.com). Last seen on the Great White Way as the salty-tongued Deloris Van Cartier in the musical Sister Act (2011)—a role made famous on film by Whoopi Goldberg—Patina Miller is currently doing “magic” blending Fosse with circus art in the first-ever Broadway revival of the musical Pippin. Miller plays the Leading Player (a part created by Tony® Award winner Ben Vereen) and performs the role to perfection, singing music by Stephen Schwartz, recreating the iconic Fosse choreography (shout out to “The Manson Trio” number), and even tackling the trapeze.

Holland Taylor – Ann Richards in Ann (www.lct.org). After 30 years away from the Broadway stage, actress Holland Taylor returns to the Main Stem in a tour de force performance as the late Texas Governor Ann Richards. On stage for more than two hours, Taylor holds the audience in the palm of her hand in this new solo show, which follows the trials and tribulations of the female political pioneer. And not only can you expect to get a hearty Texas meal from watching Taylor on stage, be sure to check out the audience beforehand. Celebrity sightings have been plentiful, including Meryl Streep, Bill and Hillary Clinton, Anne Hathaway and more!