skip to main content
Return to Fordham University
You are at:Home»Arts and Culture»“Faking It” at the Center Gallery 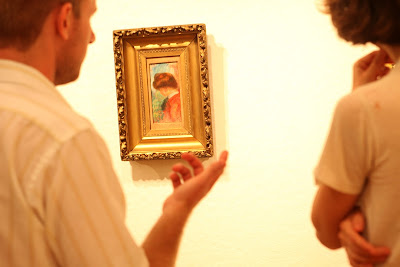 Why would a curator find cause to bring together Warhol, Rembrandt, de Kooning, Chagall, Matisse, and Renoir? Artistically and historically, it’s a bit of a stretch.

Nevertheless, a new show at Fordham’s Center Gallery has found a unifying theme: the paintings are all fakes.

With Fordham’s 4th International Conference on Cyber Security (ICCS) set to begin Aug. 5 at the Lincoln Center campus, Fordham’s artist-in-residence Stephen Apicella-Hitchcock and fellow artist Daniel Small came up with some ideas for the gallery that related to the conference—which is jointly sponsored by the Fordham and the FBI.

ICCS has traditionally used the gallery point as a registration center to welcome conference attendees. So Small teamed up with the FBI’s Forgery Division to createCaveat Emptor (let the buyer beware), an exhibition of confiscated art forgeries from the FBI’s holdings, now visible upon arrival.

“It’s an anonymous group show for a bunch of artists who will never come forward,” Small said. 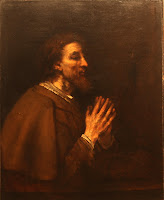 A few days before the July 26 opening, Small hung the paintings with the same care one might expect for the originals. And with good reason: some of the works have made it all the way to auction blocks of Christies and Sotheby’s.

Several of the paintings back-stories are as legendary as the copied artists, such as art dealer Ely Sakhai’s attempt pass off two “Chagalls” as real. Sakhai bought an original, had it duplicated, and then used the original’s authentication papers to sell the fakes. The two copies now face each other on opposite walls of the gallery.

“In a sense, it’s a bit like a trophy room, or a display of evidence masquerading as a straightforward exhibition of paintings,” said Apicella-Hitchcock.

While some of the direct forgeries might check out forensically, with correct pigments and aged, cracked varnish, the brush strokes often lack the flair of the real deal, said Small. 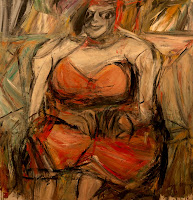 The “Rembrandt” is a case in point. The forger created antiqued varnish cracks by carving into the surface with a needle, soaking the painting in black ink, washing the painting, then repeating the process several times. But the actual brush stroking falls far short of the master’s.

“Some of the paintings are quite good are and some of them are bad, just like in any art show,” said Small. “The ‘de Kooning’ is incredible, though.”

Small noted that as the “de Kooning” approximates rather than copies an original work, which means that the forger’s own artistic hand had more leeway, and thus more expression.

The show will run through Aug. 9. 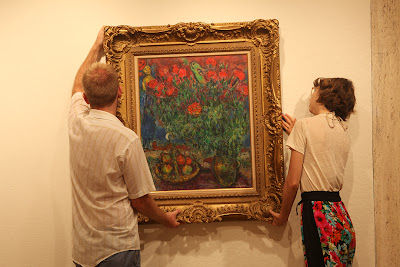 Curators hang one of two duplicate “Chagalls” in the show.