skip to main content
Return to Fordham University
You are at:Home»Arts and Culture»Faculty Spotlight 2013 Carves Space 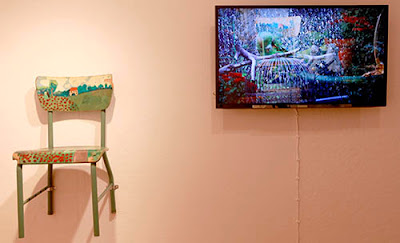 “Ross McLaren’s “Into the Garden.”

Video, architecture, and painting are relatable yet distinct disciplines. For the Ildiko Butler Gallery’s annual faculty show, which opens Nov. 5, the media are threaded together as three distinct interpretations of space.

Within the limitations of the three-walled gallery, Faculty Spotlight 2013 doesn’t attempt to create connections that aren’t there. Instead three zones are neatly mapped out for participating faculty: William Conlon, Sandra McKee, and Ross McLaren. The viewers are left to make their own connections.

Conlon provides text that guides the viewer through his three paintings on display, albeit in an abstract manner. He writes that his influences range from the Hadron Collider, to Rothko, and YouTube. A portrait of the artist in front of graffiti hints yet another influence–think Matisse meets the South Bronx. The paintings are acrylic-on-archer-paper mounted on board. He describes the works as comparable to a funhouse mirror, “forcing you to see things in a different way.” 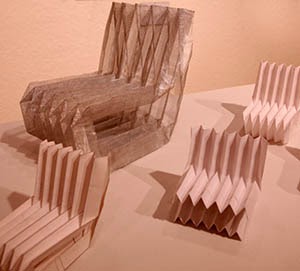 In the case of architect Sandra McKee, various built and proposed projects created with her partner Hiroki Yoshihara are accompanied by wall texts explaining the intentions in classic architectural language. As part of their research, McKee and Yoshihara experiment with origami, a kind of polar opposite to architect Frank Gehry’s crumpled-paper explorations. Viewers can compare and contrast the firm’s interlocking spaces to their folded “origami chair” models nearby.Lastly, there is McLaren’s “Into the Garden,” in which the artist leaves interpretation entirely up to the viewer. There is no accompanying text. While McLaren’s impressive biography reassures visitors of his credentials, he doesn’t explain. His piece is simply a child’s chair mounted onto a wall beside a large digital screen, projecting an image of a parrot and a reflected image of the chair. Is the video shot through glass that reflects the chair? Is the parrot added in postproduction?  The reality is amorphous, but the chair mounted on the wall attests to its reality.As to the question of space, one is left grasping at the space between inspiration and the reality of the thing: the leap from Hadron Collider to acrylic painting; from experimental origami and split level architecture, and from a child’s chair to it’s digital reflection.The show runs through Jan. 17.