When it comes the most important texts of the 20th century, Mrs. Dalloway, by Virginia Woolf, ranks alongside James Joyce’s Ulysses and T.S. Eliot’s The Waste Land. And now, thanks to Fordham’s Anne Fernald, the illustrious novel—which is just shy of the 100th anniversary of its publication—is being explored by scholars in greater depth than ever.

Fernald, an associate professor of English, is the editor of a newly published textual edition of Mrs. Dalloway, that is an authoritative version of the novel that also provides explanatory footnotes, historical context, comparisons to previous versions of the book, and other resources that elucidate a text. Fernald’s work is part of Cambridge University Press’s forthcoming nine-volume series of textual editions, which will cover all of Woolf’s novels. 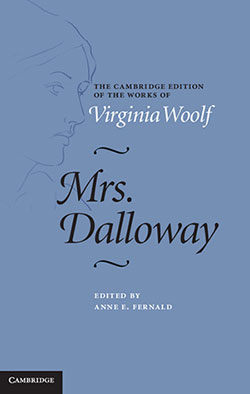 “I read everything else Woolf wrote while she was writing Mrs. Dalloway—her reading notes, diaries, letters, essays, and short fiction—and, using that, pieced together the history of how she wrote it,” said Fernald, who is the director of writing and composition at Fordham’s Lincoln Center campus.

“For example, in the novel, Richard Dalloway thinks about the dangers of the busy London streets, especially for children, and I found that, a few weeks before Woolf wrote that paragraph her own young niece, Angelical Bell, was hit by a car.”

Fernald’s edition includes a 75-page introduction that details the novel’s composition and publication history, a general introduction, a chronology of Woolf’s life, and a separate, detailed chronology of the composition of the novel. In addition, the text includes copious explanatory footnotes (“which are as extensive as the novel itself,” Fernald said) and discussions about the differences among the editions of Mrs. Dalloway that were published during Woolf’s lifetime.

“There are more than 400 differences. Some are small differences—for instance, a semi-colon in the first American [edition]that’s a comma in the first British [edition]—and others are significant differences between earlier and later drafts of the novel,” she said.

Fernald also adds new insights that she uncovered–for instance, allusions in the novel to Homer and Shakespeare that had never before been documented but that provide important information about Woolf’s characters and plot. She gave the example of an obscure song from Shakespeare’s play Cymbeline, which the two protagonists Clarissa Dalloway and Septimus Warren Smith—who never meet—reflect on throughout the novel. The allusion, Fernald said, is meant to clue readers in to the similarities between Clarissa and Septimus, who otherwise seem to be diametrical opposites.

“It’s a beautiful, difficult, modernist text,” said Fernald, who has written previously about the importance of Mrs. Dalloway, not only because of its literary mastery but also its commentary on social issues such as the oppression of women and the neglect of veterans.

The book came out in December. Read more about Fernald’s scholarship on her blog.