skip to main content
Return to Fordham University
You are at:Home»Arts and Culture»Faculty Reads: Cognition, Medieval Philosophy, and What It is All About

In the quest to parse out mental from physical, philosophers of mind have pinpointed at least one characteristic that they say is exclusively mental. This characteristic, “intentionality,” describes the property that a mental act (for instance, a thought or a desire) is always directed at something.

“Intentionality is often described as ‘aboutness,’ or the property of being about something,” said Gyula Klima, Ph.D., a professor of philosophy. “If I dream, imagine, remember, etc., then I always have to dream of something, imagine something, remember something.” 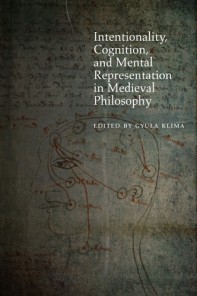 “Franz Brentano, the modern philosopher who revived the medieval notion of intentionality, says that the object that a mental act is about may or may not exist in reality,” he continued. “For instance, I can imagine a unicorn, but that doesn’t mean unicorns exist. This, he argues, separates mental from physical phenomena. In other words, mental phenomena can deal with objects that do not exist, whereas physical phenomena only deal with objects that do exist.”

These ideas are at the heart of a new book Klima is editing, Intentionality, Cognition, and Mental Representation in Medieval Philosophy (Fordham University Press, 2014). The volume, a collection of essays by international experts in medieval philosophy and philosophy of mind, takes an in-depth look at medieval theories of intentionality, which have provided much of the scaffolding for contemporary thinking on the matter.

In addition to presenting the theories of medieval greats such as St. Thomas Aquinas and William of Ockham, the book also seeks to expose a discrepancy, Klima said. Medieval scholars contended that both physical and mental phenomena could be “about” something (in other words, both types of phenomena have this property of intentionality).

“For instance, a reflection in a mirror or a picture of a unicorn on the wall are also about what they represent, even if they do not have any cognition of what they represent,” Klima said. “Modern philosophers, however, assume that intentionality belongs strictly to the mental, precisely because the object of an intention need not exist (like the unicorn), whereas it must involve some consciousness of the object.”

Because intentionality plays a central role in contemporary philosophy, and because contemporary theories are partly grounded in their medieval predecessors, it is important to understand this disparity, Klima said.

“Clarifying these conceptual connections sheds new light not only on the historical relationships between medieval and modern thought on these issues, but also on some fundamental questions in contemporary philosophy mind,” he said.

“The book should serve as a myth-buster and ‘go-to book’ for medieval theories of intentionality, cognition, and mental representation, and also as a source of inspiration for contemporary philosophers of mind.”

Intentionality, Cognition, and Mental Representation in Medieval Philosophy comes out this month from Fordham University Press.