Susan Greenfield, Ph.D., professor of English, became taken with novelist Jane Austen as a teenager and went on to become a scholar of 18th-century literature, and Austen in particular.

Greenfield recently discussed the author on WBUR, a Boston public radio station and NPR affiliate, on the bicentennial of Austen’s death at age 41. 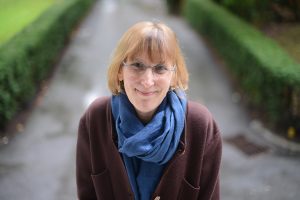 In the interview, which aired on July 18, Greenfield revealed what drew her to study Austen.

“As I grew older, I really appreciated her humor and insight. As a scholar, I find myself fascinated by so many things—by her literary technique, her narrative perspective, by her use of irony, and, particularly, her satire of human greed and cruelty and her critique of the abusive power, what we might call the patriarchal power, . . . class power, colonial power … she’s more relevant than ever at this moment in history.”

As WBUR had just aired a segment on the current health care debate prior to her interview about Jane Austen, Greenfield said it was easy to see why the novelist’s work has such contemporary relevance.

“Jane Austen is extremely interested in the difference between people who care about other people’s lives, and those who don’t,” she said.

Listen to the entire interview, which runs about 20 minutes and also includes insight from Whit Stillman, director of Love and Friendship, an adaptation of the Jane Austen novel Lady Susan, here.

The Needy and the Needed: Grappling with Tough Questions about Homelessness and Service