skip to main content
Return to Fordham University
You are at:Home»Arts and Culture»English Professor Explores Connection Between Poetry and Food

“I wanted my poem for us to suck on. Like an IV connected to the best ice tea in the world.”

These words, taken from the poem “Thunderdome” in Sarah Gambito’s new book Loves You, evoke the kind of nourishment the poet hopes readers will find in her work. 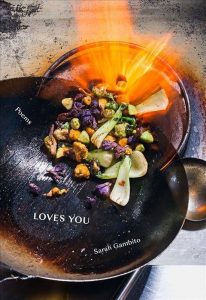 In 96 pages of poems, Gambito, an associate professor of English and director of the creative writing program at Fordham, presents a gamut of personal life experiences: how Filipino Americans—and people of color—are assailed and fetishized; the struggle to hold on to cultural identity as an American-born child of immigrants; the nuances of everyday life; and what it’s like to be the mother of a biracial child. But her book has a tasty twist.

Loves You is part poetry, part cookbook. Her poems are divided among five flavors: umami, sour, salty, bitter, and sweet. Most of them reference food in some shape or form. (Example: “When God was Filipino, / he put a pig and fire together and called it porkissimo.”) And her poems give readers a taste of not only her life but also her actual cooking. There are recipes for family favorites—salmon sinigang, barbecue scepters, watermelon agua fresca—scattered throughout the book.

Her ultimate goal? To nurture strangers with her words—to make people feel, she says, even if they are occasionally puzzled by her poems, published by Persea Books on Jan. 22.

In her poem “Don’t Eat Filipinos!” Gambito speaks about the subtle symbolism of a biscuit called Filipinos. The controversial cookie is sold in Spain—a country that controlled the Philippines for years.

“To name it after a people, a country that was colonized for 400 years … I really thought it was a joke,” she said. “Literally, it’s like you have Spanish people eating Filipinos.”

As an antidote, the page after that poem lists her husband’s recipe for lychee macarons.

“The epigraph is instead of eating Filipinos, eat these,” Gambito said. “The idea is to be thoughtful about what we’re doing, what we’re putting into our bodies—what it means.”

Gambito’s new poetry book also melds meals with motherhood. Her poem “Hapa,” defined as a person who is partially Asian or Pacific Islander, is about her 8-year-old son. He was born with blonde hair and blue eyes—a stark difference from his Filipina mother. Strangers would mistake Gambito for his nanny. She felt like they were “othering” her from her own child, she said. “Orangutan nanny in the garage / my pleasure—a disappointment,” she wrote in “Hapa.”

Gambito mentions a more universal aspect of motherhood—the joys and fears of being a mother. In the poem “First Born,” she writes, “Basically: my wish is that you are never, never pierced through the heart. / My aim is ordinary. / My anthem open. My berries gasping together in pie.”

Those last six words describe the feeling of being breathless, she said. “You want to provide. You want to give your son beautiful, sweet things, and you feel like always short to the task.”

Loves You is Gambito’s third published collection of poetry. This book was 10 years in the making, she said. But back in the book’s infancy, she recalls sitting at a ramen shop with a friend, pondering over the purpose of her new poetry collection.

“What do you think poetry should do?” her friend asked.

“It should do this,” Gambito said, cradling her warm bowl of broth with her hands. “It should nourish you from the inside out.”

Text of Gambito’s poem “Holiday” in Loves You:

Crashing across cousin stars with deep listening holes. Because we’re

my mother. I’d like to lie flayed open upon her twelve breaking torsos.

This blood would weld us to the chair and I’d let a crowd in. I’d always

thought that crowds were created in a panic. A great anti-system of

people fleeing fire. Rather crowd dynamic is cultivated because you

run towards. You want concert tickets or something to do the day after

thanksgiving. They’re almost giving it away. This is what she says as

the gold metal hits the outline of her. She says I want you to find me. I

want that you never give up and you find me.