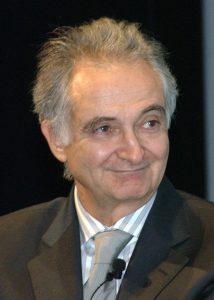 Attali, who also served as the first president of the European Bank for Reconstruction and Development, and founded the nonprofit organization PlaNet Finance, will share his ideas and listen to new ones about the future of France.

Andrew H. Clark, PhD, associate professor of French & Comparative Literature, said Attali’s visit is part of France 2022, a campaign for which he’s traveling around the world and trying to engage French expatriates to learn their thoughts about how the French government can be more responsive and progressive.

“There are huge tensions inside of the country, both with its relationship to its immigrant population as well as difficulties with retaining its talented, entrepreneurial populations that are increasingly moving to places like New York,” he said, noting that the whole continent is wrestling with issues in Greece and Ukraine, as well as the rise of far-right political parties.

“Europe is at a crossroads right now.”

Attali’s appearance is part of a larger effort to promote the French program at Fordham. The following week, on Wednesday, April 22 at 7 p.m., Fordham students studying French will compete in the Prix d’éloquence, Prix de culture contest, at the Albertine, a bookstore in the French Embassy.

The event, which is open to the public, will pit 14 students in a three-minute speaking segment, and four students in a five-page writing segment, about French culture and history, for a $200 cash prize. Both the contest and Attali’s appearance are part of a University partnership with the newspaper

“The idea is to bring attention to Fordham for what we’re doing in French, to build some relationships with the French Embassy, French Morning, and other Francophone organizations in the city so that we can give our students more opportunities,” Clark said.