skip to main content
Return to Fordham University
You are at:Home»Arts and Culture»Dostoevsky’s Sharp Criticisms of Catholicism Examined in Orthodox Christian Studies Lecture

Fyodor Dostoevsky, author of Crime and Punishment and The Brothers Karamazov, is well known for his prolific writing and acute insight into human psychology.

Less known about the Russian novelist is his fascination—as well as his criticism—of Catholicism.

At a Nov. 10 lecture sponsored by the Orthodox Christian Studies Center, Dostoevsky scholar Elizabeth Blake, PhD, assistant professor of Russian at Saint Louis University, spoke with undergraduates and faculty at the Rose Hill campus about Dostoevsky’s strong opinions about religion. The author, who yesterday would have celebrated his 194th birthday, was deeply critical of Catholics and especially of the Society of Jesus.

In her book Dostoevsky and the Catholic Underground (Northwestern University Press, 2014), Blake traces Dostoevsky’s disapproval back to his experience as a political prisoner in Siberia. For four years he was imprisoned with a group of Polish Catholic political activists and revolutionaries.

Besides resenting the Poles for their contempt of the Russian prisoners, Dostoevsky, a Russian Orthodox Christian, was wary of the Poles’ allegiance to the Jesuits, whose organizational structure was likened by Dostoevsky’s co-conspirators to communism. It didn’t help matters that the Jesuits vowed obedience to the pope—Pius IX at the time—whom Dostoevsky considered to be a spiritually manipulative figure.

Dostoevsky continued to harbor this mistrust when, decades later, as a member of the Society for Lovers of Spiritual Enlightenment (OLDP), he participated in discussions regarding the possibility of reuniting the long-divided Eastern Orthodox Church and the Western Catholic Church.

Needless to say, he was not in favor of the union.

“[He] indicates that such a union requires coercion, which Dostoevsky finds at the heart of the ‘Roman idea’ of ‘forced unity of humanity,’” Blake said. Dostoevsky described this coercion on the part of the Catholic Church with the sentiment: “Be my brother, or off with your head.” 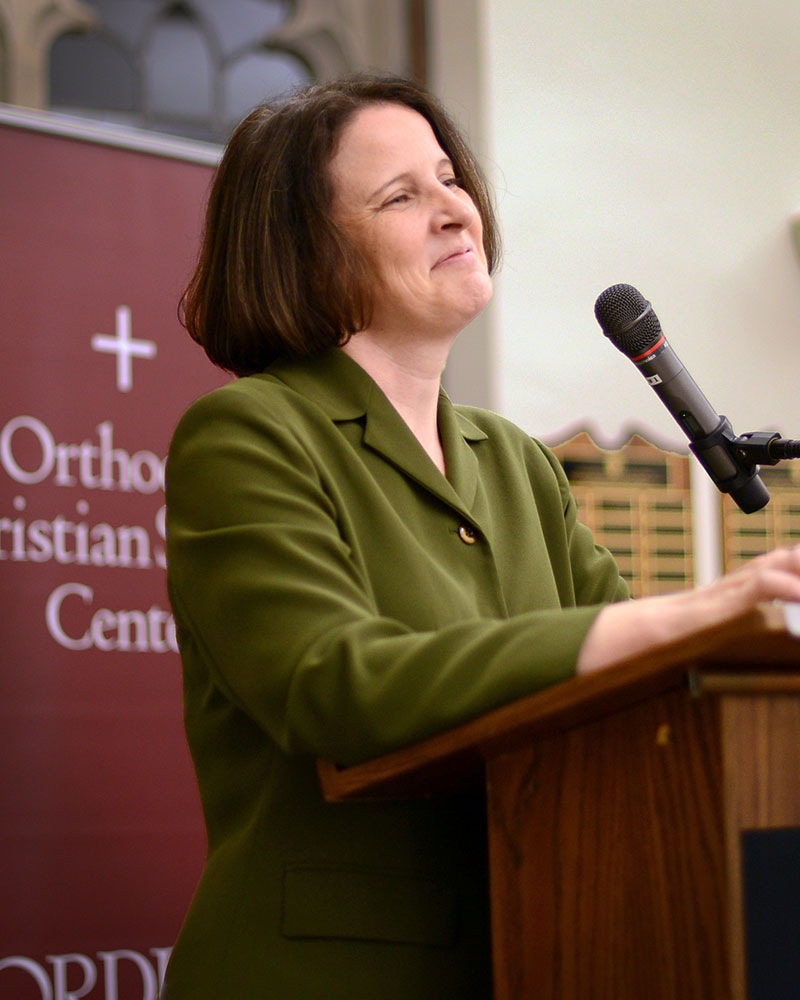 Elizabeth Blake lectures on her book, “Dostoevsky and the Catholic Underground.”
Photo by Joanna Mercuri

This obsession with Catholicism, which Blake said vacillated between fascination and repulsion, inevitably colored Dostoevsky’s writings. According to Blake, it underlies one of the best-known passages in literature, the parable of the Grand Inquisitor, told by the character Ivan in The Brothers Karamazov.

“It reinforces [the church’s]image as a feudal institution,” Blake said. “The Grand Inquisitor’s theological justification for the use of the auto-da-fé [a type of punitive torture used during the Inquisition]on his flock for their own protection . . . [and his]manipulation of the sacred mysteries to maintain control over his flock parallels the measures of political repression . . . adopted by the Catholic Church.”

Indeed, Blake said, Dostoevsky could be bold in his characterization of Catholicism.

Then again, “If he were cautious, he wouldn’t have written these great novels,” she said.