skip to main content
Return to Fordham University
You are at:Home»Arts and Culture»Defining Boundaries in Digital Humanities

In a Feb. 5 keynote address for New York City Digital Humanities Week hosted at Fordham Lincoln Center, Kelly Baker Josephs, Ph.D., an associate professor of English at York College/CUNY, cautioned digital humanities practitioners “to be clear about who your audience is and what communities you are serving.”

University Efforts in the Digital Humanities 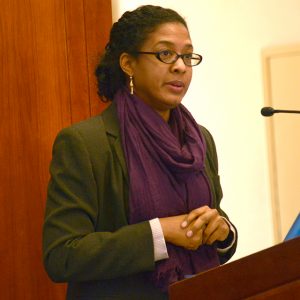 Baker Josephs’ talk resonated with an audience of digital humanities practitioners, but it also carried special resonance for the University which has been at the forefront of the Digital Humanities, starting with the Medieval Studies program, which was an early adopter of digitization. The Bronx African American History Project and the newly launched Italian American History Initiative continue to grow the field.

The Fordham Research Council also recently recommended that a digital scholarship be established to encourage the “use of new technologies to advance methods of inquiry and scholarly communication, as well as research on digital technology and media.” Micki McGee, Ph.D., and Gregory Donovan, Ph.D., will coordinate the effort under the newly formed Digital Scholarship Consortium.

Baker Josephs emphasized that no matter the discipline, keeping focus is key.

“It’s easy to get distracted, so if you’re in collaboration with a community you need to make sure you’re not just ham-handedly going out and doing whatever you want,” she said. “Listen to the community, and they will show you how they want the project to go.”

She added that some projects have very specific audiences, such as the community itself. Others are geared toward researchers, and some address both groups. Regardless, researchers need to decide upfront what the goals of the project will be, as it will affect the design of the interface in both practical and aesthetic ways, she said.

She cited the recently redesigned site, Slave Societies Digital Archive, hosted by Vanderbilt University, as an example of an archive specifically geared to researchers. The archive holds a half million images documenting the history of nearly 8 million slaves, primarily though ecclesiastical documents.

“The original technical design wasn’t serving their researchers. They couldn’t search or save things the way they needed to,” she said. “Sometimes you need to revisit the aims that were from one year, two years, or even five years ago.”

“That’s the tension one can find in some projects, it’s not always like at the end of the book where you close it,” said Jacqueline Reich, Ph.D., the co-director of the initiative. “With digital humanities, it can be opened ended, a living breathing organism.”

But not all projects are designed to be updated or upgraded, said Baker Josephs.

She cited an elegantly designed interactive site called HOPE: Living & Loving with HIV in Jamaica, as an example of a project with limited parameters and meant primarily for a public, rather than academic, audience. The site included poems by Kwame Dawes, testimonials by people living with HIV, analysis from researchers, videos, and music. But even though the mutli-media project was completed in 2008, the stories of the people living with HIV continued. When one of the subjects died in 2015, a tribute by Dawes was published by the Pulitzer Center.

“The thing with the HIV project was that it was static and done,” she said. “There was no space for the story to continue and so they had to put that story somewhere else.”

The start of the project thus becomes all the more important, she said.

Baker Josephs said that her examples correspond to an emerging digital humanities moment where activism blends with research, particularly when the research involves “diverse minority communities.”

“One can hack or yack all one wants, but if either is divorced from a real-time community then what use is the work?” she said.

She cautioned against a “rush to be timely political and radical” for “underprivileged populations in ways that make us feel relevant and then patting ourselves on the back while also accepting rewards and accolades of the academy.”

“We must collaborate with these communities.”