skip to main content
Return to Fordham University
You are at:Home»Arts and Culture»David Gibson Offers Catholic Take on the Met’s Heavenly Bodies
Photos by Tom Stoelker
At a press event preceding the Metropolitan Museum of Art’s annual spring gala, an odd mix of clergy and fashionistas gathered to launch the Costume Institute exhibition Heavenly Bodies: Fashion and the Catholic Imagination. There were plenty friends of Fordham on hand, including Timothy Cardinal Dolan, archbishop of New York, seated next to Donatella Versace, and James Martin, S.J., who had already given interviews with Women’s Wear Daily and Vanity Fair earlier that morning. David Gibson, the director of Fordham’s Center on Religion and Culture, gave Fordham News an informed Catholic perspective on the show. 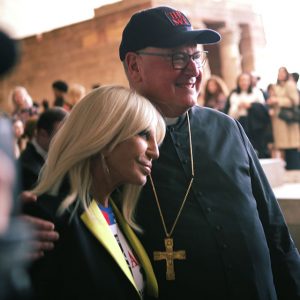 So, what do you think?

Wow. I’m really stunned and I didn’t expect to be. Frankly, they’ve just exploded it, and looked at Catholicism with new eyes. It makes you look at the Catholic liturgy and vestments in a new way. I didn’t realize until we got here how much this is really an outreach to Catholics, at whatever level of their participation in the Church, as much as it is to the rest of the world. It’s this great osmosis between the secular and the sacred where it’s taking something sacred, advancing it creatively and artistically, and maybe the sacred could take that and again let it re-inform our own liturgical practices. 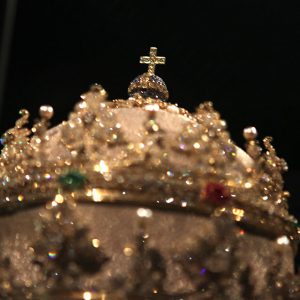 Yes, they’re always informed by it. I don’t want to be too tough on Americans, but we tend to reject our traditions and disassemble them. I think Europeans, even Catholics who have a certain distance from the church, are still able to use Catholic culture, which is so dense and pervasive there, and reappropriate it in their art. From Fellini and his film Roma, which they site here in the exhibit, to Paolo Sorrentino, the creator of The Young Pope on HBO, they all draw on Catholicism for inspiration. Some, however, would say it’s not done properly, that it’s not reverent enough.

Is the Vatican’s loan of objects from the sacristy of the Sistine Chapel a kind of proselytization?

I wouldn’t call it proselytizing. Pope Francis says you should be drawn to faith by attraction. We do not proselytize. We draw by attraction, so in that sense the exhibit, so far, it’s pretty successful—at least for me! 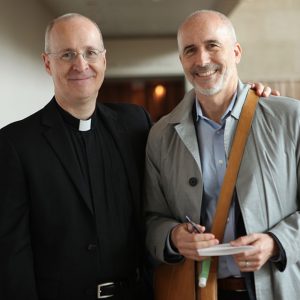 Downstairs, in the Anna Wintour Costume Center, papal vestments and jewel encrusted crowns, on loan from the Vatican, are reverentially separated from the couture pieces.

There will likely be a lot of commentary about the riches of the church on view here and whether the church should just sell it all off and give to the poor. Why does the church hold on to such valuable treasures?

I think that’s one of the weaker, even lazier arguments, that you often hear and this exhibit is a powerful refutation of that. The Catholic Church has these treasures which celebrate a broader tradition rather than just Catholic tradition. It’s also a Christian and Western tradition. By lending these items out and collaborating as the church does, and the Vatican museums do, it shows why it’s critical to keep this sort of thing together in a collection that’s accessible and open to people. But not just people who can afford to go to Rome, or afford to pay for the museum. It is our patrimony, and we’re sharing this with the wider world. I mean, do you want to go sell the Vatican’s great works of art and have them sit in private collections where nobody will ever see them again? No, you want to keep them and you want to lend them out.

Pope Francis has eschewed the grand style we see on display here, right down to the simple wooden cross that he wears. Is there a contradicting message with the Vatican’s loan?

It is odd to see this at a time when we’re celebrating this very dressed-down Pope Francis. This exhibit celebrates an old-fashioned high church style, and one that opens up a lot of other questions: Where does this exhibit connect? Is it terribly, wonderfully, European? I traveled with John Paul II and in Swaziland I saw him wearing a leopard skin pelt, literally a real fur, as a vestment over a chasuble as he came out to celebrate an outdoor Mass. You don’t see anything like that here.

They have a vestment by Matisse on loan from MoMA, which seems to be the one of the few modernist pieces of from the Church side of the show. Most look like they are from the 19th century. 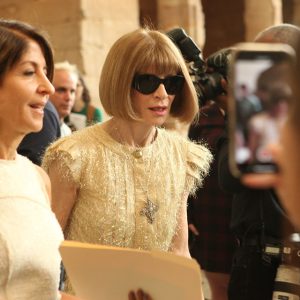 There’s a timelessness to those. Those 19th-century mitres and tiaras could have been worn a thousand years earlier, and fit right in. But, if you were to wear them today, people would say, like they did with Benedict XVI, what the heck are you doing?

So, is it true that the clothes make the man, even for the pope?

I mean, that’s part of the genius of Catholicism – that you can elect an austere, simple-living cardinal from behind the Iron Curtain, who becomes the first Polish pope. He puts on the white soutane, and he becomes Christ’s vicar on Earth. He becomes the pope. Same with John XXIII. He described himself as an Italian peasant, and he loved to eat. He was so overweight they didn’t even have a white soutane big enough for him when he was elected. But again, he puts that cassock on, and all of a sudden, this heavyset old fellow from a small village in northern Italy, becomes the pope. That says a lot about the power of classic, timeless clothing and the power of Catholic traditions and the Catholic sensibility. Any man who becomes pope becomes a kind of a noblility, at least spiritually speaking, in part because of the uniform he wears.