skip to main content
Return to Fordham University
You are at:Home»Arts and Culture»Cowboy Musical Earns Top Honors at Fringe Festival

FringeNYC, the largest multi-arts festival in North America, honored Cowboys Don’t Sing: A Western Musical during the festival’s awards ceremony at the Cutting Room in Manhattan on Aug. 25.

“It was enough of an accomplishment to be accepted into Fringe,” said Johnny Kelley, FCRH ’13, co-creator and composer of the musical. “To win was very humbling.”

Cowboys Don’t Sing, comprised entirely of Fordham students and alumni, was selected by FringeNYC as one of 200 shows for the festival’s 16-day run in August. The musical, both a tribute to and a parody of the Western genre, sold out all five performances at Theatre 80 on St. Mark’s Place. 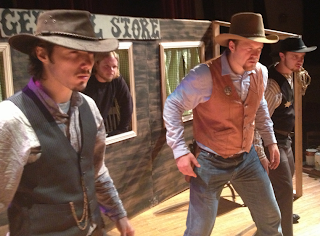 After a rowdy train heist opens the show, the lone cowboy in this musical, TJ Alcalá, FCRH ’13, wanders into the “Singin’ Town” of Tombstone Junction, and much of the plot hangs on his resistance to sing along. And whileCowboys Don’t Sing has lots of spirited songs (and dance numbers), the show’s program offers fair warning: “There is racism, violence, and some pretty terrible singing. We only apologize for the racism.”

One highlight from the witty show features the cowboy’s trusty steed, Shadow, played by Tim Rozmus, GSB ’13, who sings a pun-filled tune about how hard it is to be a horse “who just can’t saddle down” in a “One Horse Town.”

Flynn and Kelley crafted the idea for Cowboys Don’t Sing after taking the late Fordham artist-in-residence Meir Ribalow’s class on Movies in the American Experience. “He taught us about the Western code, the characters, the genre,” said Kelley. “He loved it.”

The musical is dedicated to Ribalow, who passed away in August 2012.

Cowboys Don’t Sing will return for an encore of five performances on Sept. 12, 15, 25, and 26 at the Players Theatre in Greenwich Village.