skip to main content
Return to Fordham University
You are at:Home»Arts and Culture»Communicating Scholarship Through Improv and Play 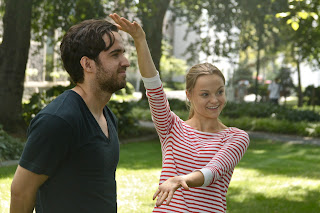 Maria Vermeulen, a master’s degree candidate in English,
introduces Lucas de Aragao, a native of Brazil who is enrolled in the
graduate program in Elections and Campaign Management.
(photos by Rachel Nuwer)

About 80 of Fordham’s new graduate students are playing an impromptu game of catch with a big, bright blow-up ball in Keating Hall. A biology student jumps from her seat to snatch the toy mid-air and then tosses it to a creative writing candidate who heads it, soccer-style, to a political science major. “Nice catch!” one of the students commends. His colleague, however, is grasping nothing but air in her outstretched hands. The ball does not exist.

This invisible game of catch comprised one component of “Communicating Scholarship,” a new session held on Aug. 21 at this year’s Graduate School of Arts and Sciences (GSAS) orientation, aimed at introducing students to the art of communication through improvisation.

“Effective communication is key for a successful career,” said Amy Tuininga, Ph.D., associate dean of GSAS and an associate professor of biology at Fordham. “Yet academics in general are so often associated with bad communication skills.”

As a biologist, Tuininga knows how challenging it can be to convey complex research findings to students, friends, or the general public. Yet for academics, explaining their work is essential for making successful grant applications and for increasing public awareness of pertinent issues and breakthroughs.

With that in mind, Tuininga decided to borrow techniques from actor, writer, and director Alan Alda—a 1956 Fordham graduate—who runs classes for science students at Stony Brook University on how to clearly and engagingly convey their work to non-science audiences.

“It’s not that they need to dumb down their results,” Tuininga explained. “It’s about making effective word choices so the audience can grasp the concept rather than get bogged down in the technical terms.”

Tuininga called on the expertise of scientists Christine O’Connell and Ramona Walls and theatre faculty Jeff Withers and Steve Marsh to introduce Fordham’s incoming students to the topic. The “Communicating Scholarship” orientation session kicked off a series of similar workshops planned for this academic year that students can attend free of charge.

Peter Wirthumer, a master’s degree candidate in international political economics and development, and a native of Austria, sees the utility of practicing communication skills. “We need two ways of presenting our research, one for our colleagues and the other for our grandmother,” he said. “We have to work on the grandmother style: she needs to be fascinated, but also understand it.”

Back in Keating Hall, the students put away the invisible ball and break into groups to head outside and unleash their own inner actors.
In an improv name-game, students arranged themselves in a circle and first stated their names. Withers invited a few to try and recite all 13 names, but no one succeeded. “Let’s add another element,” he said. He asked students, again, to state their names, but this time to also mime one of their favorite activities. Some played air drums, others surfed, and one student shelled out cash in an unseen shopping exchange. This go-around, they fared much better at remembering one another’s names. Next, in paired one-on-one interviews, Withers asked his pupils to share their passions for 45 seconds. He instructed the listener not to speak; the purpose, he explained, is simply to focus on listening. After taking turns, each team stood up and presented their new friend’s hobbies and interests to the group.“Little did you all know that you’re going to be playing some games with us today,” Withers said to a group of 14 nervously smiling young academics. For the next hour, Withers, an adjunct professor at Fordham, engaged his group in a variety of interactive exercises.

The students, though strangers, quickly took to the activities—and to each other. “This session was great,” said Stephanie Hicks, a doctoral candidate in psychology. “It was a relaxing, fun way to get to know people in the graduate school on different levels.”

At the end of the session, Hicks and the other students were hugging and making plans to go for a jog together or to cook and share a meal.

“Communicating Scholarship” concluded this year’s two-day orientation, attended by an unprecedented 150 students. This final session built upon earlier talks, such as “Navigating Academic Life at Fordham” and “Life After GSAS,” the latter of which featured GSAS alumni describing ways to get the most out of the Fordham experience.

“I liked that the orientation did discuss the serious stuff but also provided padding for us by having fun workshops,” Hicks said. “I look forward to becoming a professional in my field at Fordham, but also to enjoying the whole experience and having a good time in the process.” 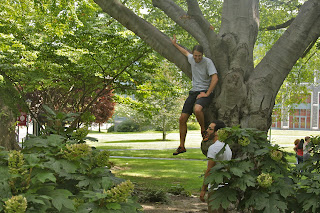 Graduate sociology student Kasey Zapatra got a bird’s-eye view during
an improv game in which students were instructed to “wander around and
let the environment direct their interests.”