skip to main content
Return to Fordham University
You are at:Home»Arts and Culture»College at 60 Summer Series Brings Great Films to Fordham 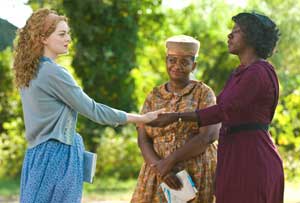 Fordham’s College at 60 kicked off its new summer series, “Where Great Books Meet Great Movies!” on Tuesday, June 5 with the Academy-award nominated film The Help.

The 2011 comedy-drama film adaptation of Kathryn Stockett’s novel of the same name was the first of four films that will be screened at the 12th Floor Lounge at the Lincoln Center campus. It will be followed by 1 p.m. showings of Wings of the Dove, The Name of the Roseand The Grapes of Wrath.

The screenings are followed by a lecture and discussion led by Robert Spiegelman, Ph.D., adjunct professor of sociology and social science at Fordham. Spiegelman, a screenwriter and creative producer with several feature film and documentary projects under development, has incorporated film for years as an integral part of all of his courses at Fordham, Long Island University and the College of Staten Island.

He will be joined by a two-time Emmy Award-winning writer, director, and producer Jon Goodman. Goodman’s most recent film, Freedom Songs: The Music of the Civil Rights Movement, aired on PBS stations in 2009–2010. He is the author of The Kennedy Mystique: Creating Camelot (National Geographic Books, 2005) and since 2006, he has been an adjunct professor of the arts at New York University’s Tisch School of the Arts Graduate Film Program.

Spiegelman said the films all share thread of being passionate, ethical, cutting edge and relevant to the present moment.

“They’re paired with a books that are essential for good citizenship and the kind of ethical living that is in tune with Fordham’s mission and practice,” he said.

The screenings are open to the public. There is an entrance fee of $20 per event, payable by cash or check at the door.