skip to main content
Return to Fordham University
You are at:Home»Arts and Culture»Celebrating Bronx Pride

From Yankee Stadium to the New York Botanical Garden, the Bronx is known for a myriad of attractions.

But on April 1 at the University’s first annual Bronx Celebration Day, Fordham students came together to celebrate the Bronx’s rich history and the local businesses and organizations that are contributing to its diverse and vivacious community.

“So many people still think the Bronx is stuck in 1977, and they don’t realize that it’s an incredibly resilient community,” said Fordham College at Rose Hill senior Ariana Cipriani, who co-organized the event. “The reason the Bronx is booming today is because people have stuck around. They put their time, money, and love into making their communities better, safer, and more vibrant.”

All photos by Bruce Gilbert
Presented by the Fordham Club, Commuting Students’ Association, and Community Board 6, Bronx Celebration Day, held at the Rose Hill campus, featured over 30 local businesses, nonprofit organizations, cultural organizations, artists, and vendors tabling in the McGinley Center. With eye-catching displays of handcrafted jewelry, fine art, cookbooks, mystical candles, and more, the room was a snapshot of the creativity that exists in the borough. 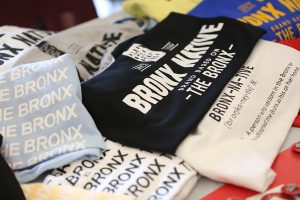 The event also featured performances from Fordham’s A cappella singing groups B-Sides, Satin Dolls, and the Ramblers, and dance routines from Expressions Dance and the Jetés. The DJ collective Uptown Vinyl Supreme of the Kingsbridge section of the Bronx also got the crowd moving with old-school hip-hop and dance mixes.

In addition to reveling in all the things that make the Bronx one of the most exciting places in the city, the event was an opportunity to strengthen Fordham’s relationship with neighboring communities, said organizers.

“It was time for a bigger event on campus that allowed the members in our surrounding communities to interact with Fordham students in a more meaningful way,” said Fordham College at Rose Hill senior and co-organizer Paola Joaquin Rosso, who hails from the South Bronx. “We decided there should be a day that celebrates the Bronx because that’s what connects [Fordham students and local residents].”

The Bronx Hot Sauce, made with serrano peppers from Bronx community gardens, was one of many Bronx-centric items sold by vendors Paul Ramirez and Anthony Ramirez II of Mainland Media. The Ramirez brothers hoped Bronx Celebration Day would inspire Fordham students to see the community through fresh eyes, they said. 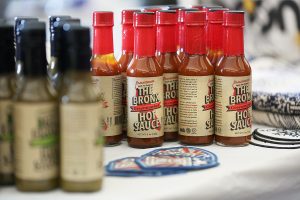 The Bronx Hot Sauce, a collaboration between Small Axe Peppers LLC and GrowNYC, is made with serrano peppers from Greenmarket farms and Bronx community gardens.

“Although Fordham students may be coming to the Bronx to just go to school, it’s important for them to realize their responsibility to the surrounding communities because it furthers their development,” said Paul Ramirez. “You have to respect the space you’re living in, even though it may be foreign to you.”

Angel Hernandez, director of programs and external relations at the Bronx Historical Society, had a similar take in his presentation about important events in Bronx history that have shaped the borough and its residents.

“The Bronx is a very historical place and Fordham University is also a historical place,” he said. “I think students should be a part of change in the Bronx. There is just so much education to extract from the Bronx that should be translated in the classroom.”

Still, Hernandez’s Bronx history lesson wasn’t short of fun. Before he began his talk, he beatboxed to a rap by Mark Naison, Ph.D., professor of African and African-American studies, in the spirit of hip-hop, which was born in the Bronx.

“We recognize that Bronx history is incredible and we want to be a part of that in the future,” said Cipriani. “This is a great step in the right direction.”