skip to main content
Return to Fordham University
You are at:Home»Arts and Culture»Business Professor’s Off-Broadway Play Imagines the Secret Lives of Edward Gorey

Before Tim Burton, there was Edward Gorey, a reclusive artist whose life is the subject of an off-Broadway play written, directed, and produced by Associate Professor Travis Russ, PhD.

GOREY: The Secret Lives of Edward Gorey portrays the enigmatic writer and illustrator who shunned publicity and lived his final days in solitude amidst 25,000 books and seven cats. The play marks the debut production by the Life Jacket Theatre Company, of which Russ is founding artistic director. The play opens this Saturday, April 30 at HERE Arts Center.

“I’m fascinated by people who live out their lives on the fringes, and who might be considered outcasts,” said Russ, an associate professor of communications and media management at the Gabelli School of Business. “Gorey was certainly a unique person.”

An eccentric with a taste for the macabre, Gorey authored and illustrated more than 100 works during his life, many of which were children’s stories that dealt with adult subjects, such as death, love, strangeness, and loss. He is renowned for the sinister pen-and-ink drawings that accompany his stories, and which serve in GOREY as backdrops for the stage.

The play features three actors who depict Gorey at different points during his life. One represents Gorey at the age of 25, before he published his first book. The next is 35-year-old Gorey, who has by then published several works. The final character is Gorey shortly before he died at the age of 75. The three Goreys exist simultaneously in the play, and at times speak to one another and to the audience.

“It’s a tapestry of different moments from his life,” Russ said.

Russ first encountered Gorey when he stumbled on the Edward Gorey House on Cape Cod, where the artist died in 2000. Not much is known about his life, which meant that Russ had to be imaginative in his portrayal. Part of the play is based on interview transcripts and Gorey’s notes and journals, and other parts are fictionalized.

“As I was diving into the archives, I realized he was very inconsistent in what he told reporters. He would change what he said from one interview to the next. Sometimes he’d admit that, and sometimes he’d be very evasive,” Russ said. “At first that was frustrating, but then I figured I’d have to embrace it. Gorey had many different personas, and we simply don’t know a lot about him.

“Some of the most extreme moments in GOREY, the ones that people think I made up, are the ones based in reality,” Russ said. “That kind of work is really exciting to me—the stuff you can’t make up.”

To Russ, Gorey was the perfect inaugural subject for Life Jacket, an innovative company that marries the academic and the theatrical. Productions are born of extensive research, interviews, and textual analysis, which then come together as a play and are brought to life on stage.

Life Jacket embodies the objectives that Russ, whose scholarly background is in communications and theater, brings to his research and teaching at the Gabelli School of Business. Many of his classes—such as his popular course, The Storytelling Project—help business students learn to communicate effectively and compellingly.

“You get hired in business if you have an interpersonal savvy—if you can frame a message effectively, spin it to make it relevant to a variety of stakeholders,” Russ said.

“There’s a craft to communications. Being successful in a business environment isn’t just about balancing budgets or understanding operations. Business happens in a person-to-person sphere. My job is to help business students excel when it comes to communicating with other human beings.”

Previews of GOREY begin at the HERE Arts Center on April 30 and May 1, and the play premieres on May 3. The show will run through May 22. Find a full schedule and more details here. 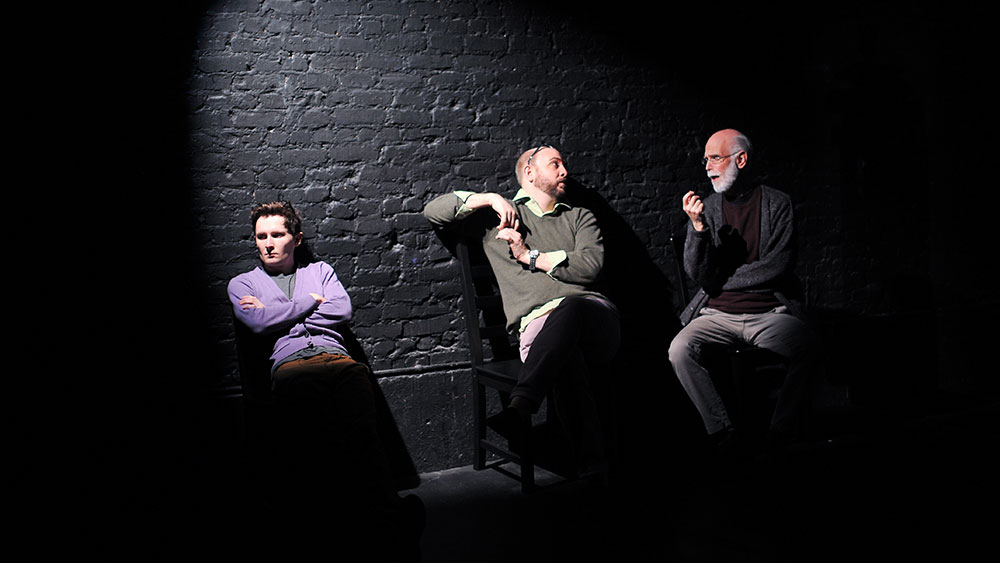