“I often like to refer to the justice as the other Sonia from the Bronx,“ began Manzano, getting a laugh from the crowd sitting in the sunshine on the Walsh Family Library lawn. Manzano, an actress and writer, is most noted for playing Maria on Sesame Street. She is the author of Becoming Maria and A Miracle on 133rd St, among other books.

Sotomayor has penned a few books of her own since being appointed to the nation’s highest court in 2009. She is the author of My Beloved World (2013) and a children’s book called Turning Pages (2018). She is also expected to release Just Ask! Be Different, Be Brave, Be You in September.

Sotomayor said she wrote My Beloved World to remind herself, and everyone, that none of us succeed alone.

“Nobody can do it by themselves. No matter what you do in life, people help you do it. My book was for me to remember that always. All of those people and experiences that started here in the Bronx, that made me— that’s what I wanted to write about.”

The Bronx Book Festival, just in its second year, included a full line-up of author-led panels. The Bronx Book Festival is organized by The Bronx is Reading, founded by Bronx native and book publicist Saracia Fennell. This year the event was co-sponsored by Fordham University. Panels were held on both the Fordham’s Rose Hill campus and Fordham Plaza. Bronxites and folks from all over NYC lined up at 8:30 a.m. in front of the University to attend the Bronx Book Festival and listen to Sonia Sotomayor speak. 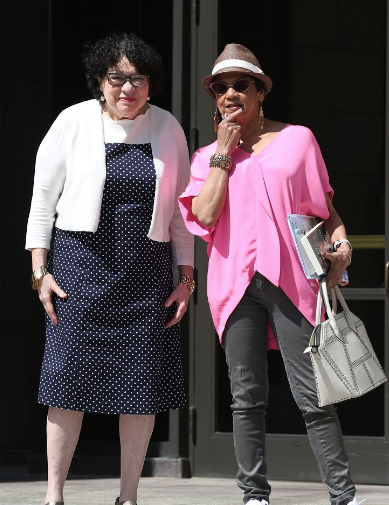 Sonia Sotomayor and Sonia Manzano posing in front of the Walsh Library.

At their in-conversation style event, Sotomayor told Manzano how much she admired her work on Sesame Street.

“You reached out to a community of Latinos that were ignored in mainstream television at the time,” she said.

Manzano and Sotomayor met on the set of Sesame Street for the episode The Justice Hears a Case. Over a cafecito, Sotomayor explained the role of supreme court judge to the show’s characters.

Just as they did on Sesame Street, at the Bronx Book Festival they both spoke in a way that was accessible to the many young children in the audience.

Sotomayor asked the organizers to place a row of child lawn chairs at the very front. “I put all the kids in the front because I remember being a kid and having to sit in the back, and I couldn’t see anything, and I hated it,” said Sotomayor.

At times, the justice spoke directly to the kids. She told them about her library and why it was important to her.

“One of my favorite places was and still is the library. It was one of the places I escaped to after my dad died. My house was very, very sad when my dad passed away. So, I would go to the library and get lost in books. I traveled around the world when I read books,” she said as she pointed to a picture of her library card in her book Turning Pages.

“Does every child in the audience have a library card?” she asked, encouraging those that didn’t to “ask your mommy or daddy to get you one.”

Sotomayor told the crowd that Lord of the Flies was the book that inspired her to become a lawyer. “I learned something very important,” she said of reading the 1954 William Golding novel, in which a group of boys are marooned on an island and attempt to govern themselves—with tragic results.

”Laws help us figure out how to treat each other better,” she said, “and how to share things in this world together.”

She also cited the importance of her mother purchasing the Encyclopedia Britannica for her while they lived in the projects in the Soundview section of the Bronx, now named the Justice Sonia Sotomayor Houses. The volumes helped her learn about the world beyond her home borough. 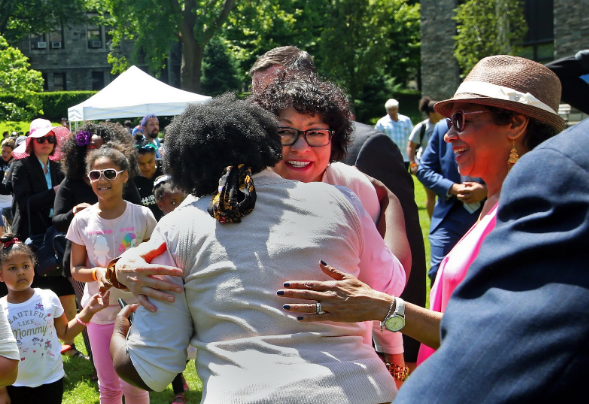 “You cannot dream about becoming something you don’t know about,” she said.

In the middle of the conversation with Manzano, Sotomayor got up and said she was “going to go for a walk so that the people in the back can see me.”

“I give out hugs freely,”  she added as she walked down to the audience members in the lawn.

Like many of the authors on the festival lineup, Lilliam Rivera, a keynote speaker and young adult author of Dealing in Dreams and The Education of Margot Sanchez, was in the audience for Sotomayor’s and Manzano’s session. In her own talk, Rivera discussed the significance of the festival itself.

“I write about my home, and those connections,”  said Rivera, who set all of her books in the Bronx. She held her book launch for Dealing in Dreams last spring at the Bronx’s only independent bookstore, The Lit. Bar, founded by Noelle Santos.

Growing up near Fordham Plaza, she said, “If you wanted to buy a book you had to go to the city.” 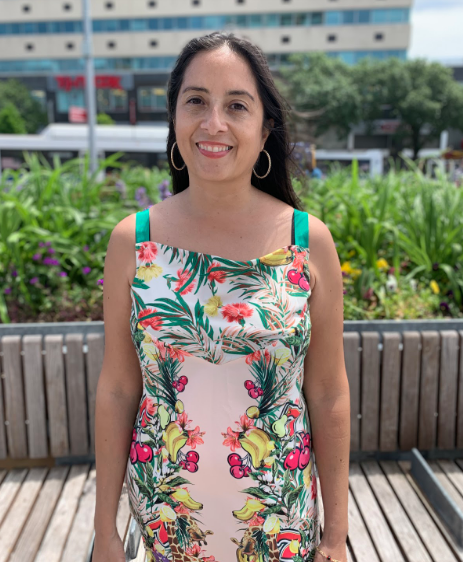 Like Sotomayor, Rivera and her family got their books from the New York Public Library.

Rivera was inspired by her father to become a writer. “Growing up, my father used to recite poetry at events. He still does. My parents are very proud of my career. They are always making me sign books for their doctors or neighbors.”

Readers young and old said that the festival inspired them.

Jasmine Cordero of Soundview said that coming to the festival last year sparked her interest in reading.

“I bought two books last year, and I read them in a month. I didn’t know that I could read that fast. Now, I’m always looking for Latinx or African-American writers. I look for writers that look like me and writers that write about the community that I live in.”

The Bronx is both home and a source of inspiration for many of the panelists. For Josue Caceres, poet and brand manager of Bronx Native, the Bronx is more than a place.

“The Bronx is its own character in my writing. It’s important to be here and share the space with both kids and adults and show them that people in the Bronx read and write, and that it’s part of our culture.“