skip to main content
Return to Fordham University
You are at:Home»Arts and Culture»Bronx Black History: Hetty Fox, Portrait of a Tireless Activist
This month, Fordham News profiles men and women who have shared their stories in Fordham Libraries’ Bronx African-American History Project.
The block-long, slightly sloping one-way street in Foxhurst in the Bronx is technically known as Lyman Place.

But come summertime, it may as well be known as “Play Street Boulevard,” or, perhaps, “Hetty Fox Lane.”

That’s because Fox, whose family moved to the neighborhood in 1940 when she was 3 years old has been a near-constant presence in the neighborhood. She has also been a driving force behind a 40-year tradition of periodically closing the street to traffic and opening it up for children to play.

It was Fox’s community activism—and her willingness to chase vandals who were gutting and burning neighboring buildings in the 1970s—that led researchers include her story in 2004 in the Bronx African American History Project (BAAHP) oral archive.

In her younger years, Professor Fox, as she is known around town (she taught sociology at California State College at Northridge), was also an accomplished performer in dance and African drumming. In a three-story building down the street from the house she grew up in, Fox established the nonprofit Neo/Presearch Energy Foundation on renewable energy, the arts and education. The foundation was the site of an annual Christmas party, an after school program, and featured walls adorned with a list of the 186 tribes of Africa and letters and numbers from various languages. 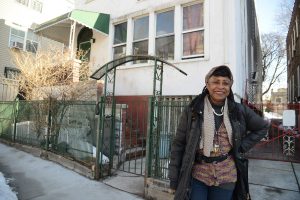 To Fox, the block has always been synonymous with family, and she has tried to nurture the sense of community that was present when she was growing up.

Even as fires consumed vast portions of the borough (and news of them was broadcast nationally during the 1977 World Series by Howard Cosell), she was attracting outsiders to her neighborhood by organizing international energy conferences at the foundation. For those outsiders, she published maps of where to find the best neighborhood restaurants, to signal that there was indeed still life in the borough.

“You have to be there. You have to live there, and you have to demonstrate your care by what you do. You have to presume you’re on camera at all times because there’s always a 3-year-old in the window watching you,” she said in her 2004 interview. “[She] may not speak English, but she knows what you’re doing with a broom—you’re sweeping the street. You’re out there demonstrating, for them.”

Today, affordable apartments have replaced many of the abandoned houses or vacant lots that characterized the neighborhood. Although her community center is no longer open, and the neighborhood has changed along with much of the Bronx, Fox is taking the changes in stride.

“I never had an expectation of something that I could measure against that expectation, like we’re doing better now,” she said.