skip to main content
Return to Fordham University
You are at:Home»Arts and Culture»Bridgerton Author Shares Advice on Writing and Life
Photo courtesy of Liam Daniel/Netflix
Julia Quinn, author of the New York Times bestselling Bridgerton book series that became adapted into Netflix’s most-watched original series of all time, guest-starred in a Fordham student-led Q&A on March 24. She shared tips on the writing profession and described what it was like to see her fictional characters become a beloved reality for millions of people across the world.

“The biggest thing is just the scope of it—and to realize that hundreds and hundreds of people are working on this thing that started out just in your head,” Quinn said, addressing more than 100 members of the Fordham community over Zoom.

‘A Once-in-a-Lifetime Thing’: Stories From the Bridgerton Set

Quinn recalled the journey from landing a contract with Shondaland Media, the company behind award-winning series Grey’s Anatomy, Scandal, and How to Get Away with Murder, to watching her romance novels become a television series.

“It started with sitting in a Starbucks, drinking coffee, and getting a phone call and practically falling off my stool,” Quinn said. “[But] it was a very slow process. I thought publishing was slow, but adapting a book is glacial. From the very first phone call to the time the show actually appeared on Netflix was four years.”

In those four years, Quinn served as a consultant for the TV series. She read the scripts before they went into production, but her involvement was limited. Quinn relinquished creative control on the project—and for a good reason.

“I did not want to do anything to jeopardize this. This was clearly a once-in-a-lifetime thing for me,” said Quinn. She also knew her work was in good hands: “One of the smartest things that you can do is recognize other smart people. And I was not going to tell Shonda Rhimes how to make television.”

Quinn said she loved the results, especially the color-blind casting and the diverse storytelling from the scriptwriters. 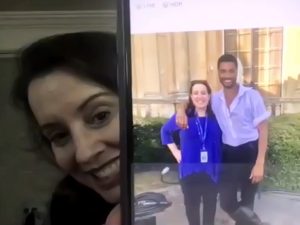 Quinn and Regé-Jean Page at a Bridgerton filming location

“There were somewhere between 15 to 20 writers working on the project, and that group of people was incredibly diverse—not just race, but gender, sexual orientation, religion … they all can bring life experiences and imagination to the story that I can’t,” said Quinn. “One of the main things about a romance novel is the way it makes the reader feel and the happiness that you get at the end … I love that Bridgerton the television show has managed to create something where more people can see themselves in the story and see themselves getting the happy ending.”

Quinn’s lips are sealed on the show’s second season, which will begin filming this spring. But she showed her audience an iPhone photo of her and Regé-Jean Page, who plays a leading character on Bridgerton, from a season one filming location.

“Regé-Jean Page is absolutely as handsome as you think,” she said, while a few students gasped from their screens and typed their reactions in the chat box, including “JEALOUS” and “Love Love Love!!!!”

Tips on the Creative Writing Process

“All of your characters are very well developed. Any tips for developing characters and making their backstories?” wrote one student, Madeline Lanni.

Quinn advised her to think deeply about her characters’ backstories before beginning to write a novel—something she started to do while writing The Duke and I, the first novel in the Bridgerton book series.

“I ended up understanding these characters so much more. Since then, I have adopted this in my prewriting. I’ll spend several pages talking about who these people are … because we are all shaped by our experiences. Does this person have brothers and sisters? Are they the oldest? Are they in the middle?” Quinn said. “Many of [these details]never show up in the book. But it means that somehow, in some amorphous, creative way, I know the character better. And I think that comes through.” 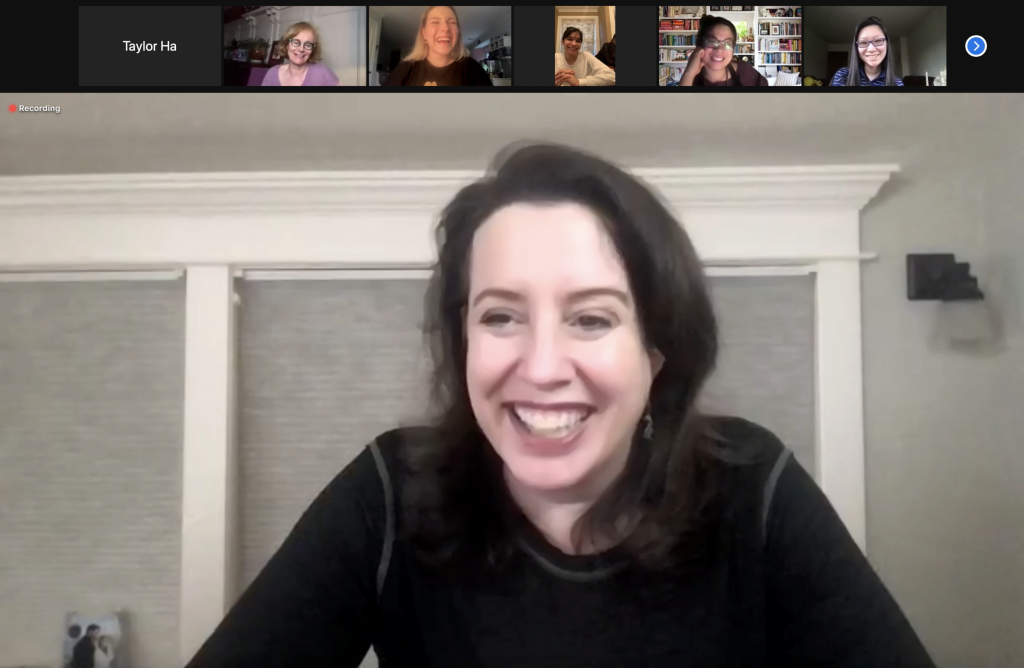 Quinn and several Fordham students and faculty on the Zoom call

‘Believe in What You Do’

Another student, Vivienne Blouin, asked Quinn how writers, especially young women, can defend the merit of their work genre—particularly in romance—against condescending peers.

“Julia Quinn gave us a fascinating, authentic look at the life of a bestselling author, now propelled into the forefront of American pop culture by the Netflix series. It’s important for students to meet people at the top of their profession, if only to see that they are merely people. Julia offered great advice about writing, as well as explaining the process by which a book is optioned. Her discussion of consent in the first Bridgerton book—the fact that what is now seen as the hero’s lack of consent was greeted at the time by readers as the heroine’s feminist triumph—is also significant as a counter-weight to judgement of the past,” said Bly, who writes fiction and romance novels under the pen name Eloisa James.

“Perhaps equally importantly, she confessed that she had no real idea why she chose her major [art history at Harvard College]. That was perhaps the most inspiring of all. My takeaway: learn how to write, and you can do anything with your degree.”