skip to main content
Return to Fordham University
You are at:Home»Arts and Culture»Book Graffiti for the Renaissance

Some call it “doodling”; librarians might even brand it “defacing.”

Above, marginalia in a painting by Hans Holbein the Younger, and
below, in an early printed book of Pliny the Younger’s Letters .

But to historians, it’s “marginalia.”

On Nov. 12, reading historian Bill Sherman, Ph.D., professor of English at the University of York, delivered the fall Southwell Lecture on visual responses to texts, as expressed in the margins of more renowned medieval and Renaissance publications. He framed his talk through the words and works of Erasmus, the Dutch humanist, Renaissance philosopher, and Catholic priest, to illustrate the shifting relationship between reading and seeing in the 16th century, during the advent of printing.

While Erasmus, it turned out, was a lousy doodler himself (and warned against profane use of religious imagery), ironically his own image was widely reproduced in his time—through book drawings and doodles, on a coin, and most famously, in a painting (depicted at right) by Hans Holbein the Younger. Some of Holbein’s earliest surviving work, in fact, is itself marginalia—a set of some 80 drawings in the margins of one of Erasmus’ most famous books, In Praise of Folly. 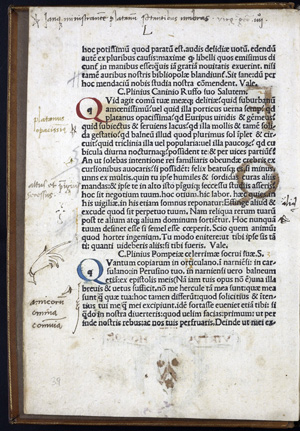 Erasmus believed that the visual was part of the imagination, and that skillful illustration was a part of storytelling in print. While teaching at Oxford he was also said to have encouraged his students to mark brilliant passages or maxims within the books they read.

Currently, said Sherman, generalizations about Renaissance marginalia are hard to come by, as “there are a lot out there still to be seen or discovered.” He shared his own enthusiasm for an early printed edition, housed at Stanford University, of Pliny the Younger’s Letters in which Italian humanist Bernardo Bembo has added ostentatious pointing fingers (“manicules”) and staring eyeballs (“opticules”) to the margins to accentuate certain passages. He also showed slides from a 1481 copy of Dante’s Divine Comedy that had 19 printed illustrations, but which also contained hundreds of visual marginalia by artists—including an “extraordinary map of hell.”

Marginalia, Sherman concluded, do not often compete with the beauty and craftsmanship of great medieval scribes and illuminators. However, they offer a sense of the new mode of interaction during the time, which draws on medieval models but which is also part of an emerging culture of print, as well as the rise of humanism and “commerce with the classics.”

“Even the crudest ones give us a sharper image of  the period eye,” he said. “Like great art, good marginalia have a peculiar power to deliver intimate glimpses of the Renaissance world. And this sense of intimacy is, in the end, the most striking feature in these visual modes of reading.

“[We’re being] allowed to look over the shoulders at the hands of long-dead people, and, with this material, it is beginning to feel as if we might be able to see through their eyes.”