skip to main content
Return to Fordham University
You are at:Home»Arts and Culture»Blurring the Line Between Mentor and Colleague

Senior Anna Abowd has been in the costume shop since freshman year.

Kai Brothers waxes philosophical when discussing theater. The production manager for the Theatre program talks about the “thingness” of a play and paraphrases French philosopher Georges Bataille, saying that art is essentially wasteful.

“But there has to be waste in order for things to blossom and I think theater is perfect example of that,” said Brothers, gesturing to the large set for Agamemnon, which consumed 30 sheets of plywood and hundreds of feet of lumber.

The production just wrapped up this month in the Pope Auditorium and concluded a series,  A Season of Imagining Post War , that asked the question ‘What if there were no war?”

Brothers’ day-to-day duties involve coordinating artists and designers for almost every physical aspect of a production, from hair and makeup, to costumes, sets, lighting and sound.

Full-time faculty and guest professionals usually direct and design the productions. For Agamemnon, the internationally acclaimed Tea Alagić will direct. But the project was unique in that several students have also taken on leadership roles. Seniors Jessie Bonaventure, Alex deNevers, and Lawrence Schober, designed the sets, lighting, and sound, respectively.

“Typically our student designers work as assistants to professionals, but we have a really strong senior class that were able to take on the challenge and meet it,” said Brothers.

He added that the 16 to 20 design students must compete over the course of the four years for only a couple of design slots that open up each season, creating rather real world competition. 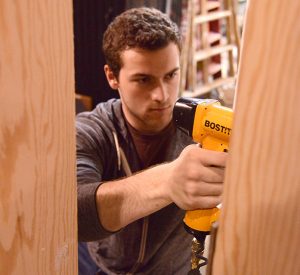 The Agamemnon production was very “build heavy.” Costumes designed by faculty member Becky Bodurtha, were labor-intensive and sculptural. Bonaventure’s sets were series of steps that appear to riff on Mesopotamian ziggurats, deNevers’ lights were incorporated into the structures, and Schober’s sound filled the cocoon-like intimacy of the space.

The production spotlighted Brothers’ more subtle but equally important role, that of mentor and teacher. Yet, the theatre program encourages students to interact with the their professors as professionals.

“It’s a little funky when you’re talking to them,” set designer Bonaventure said of her professors. “Am I talking to a fellow designer, or my production manager, or my mentor? The lines get a little blurred, but in a good way.”

In Brothers, students find a frank professional who has spent more than 12 years as a production manager on and off Broadway in nearly 250 productions.

While Brothers teaches only one class, a lab seminar on producing one’s own work, most of his “class time” plays out through building a show. He said that the protocols of the theatre program’s main stage at Pope Auditorium mirror the profession. 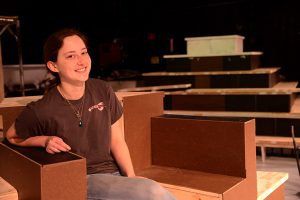 “My concerns are less with product and more with process,” he said. “If we can get a designer to talk about what it means to go through a set of drawings, model making, and editing process with scene shop, that’s more important to me than the actual play.”

“We expose our students to the challenges of using their resources effectively—whatever that may be, budgetary, people, time—in order get the artists’ vision up onto the stage,” he said.

He said he loves that he gets to work with so many artists that inhabit a single vision, which, by its very nature, is ephemeral. But at the end of the day, he said, it’s simply story telling.

“You spend all this time, building out a production, you perform it a certain number of times and Whoosh! Poof! It’s gone. Now it’s out there in the cultural zeitgeist and part of the of the culture, that in itself is the thingness of it.”