skip to main content
Return to Fordham University
You are at:Home»Arts and Culture»Black History Month Lecture: Examining Art with ‘A Black Gaze’
Tina Campt shares some of her favorite artwork via Zoom.
During the pandemic, many of us have come to appreciate the fleeting time we’ve had in the public and social spaces that help shape us. For Tina Campt, a Black scholar who specializes in visual culture and contemporary art, those places are museums and art galleries. In this year’s annual Black History Month lecture hosted by Fordham’s Department of African and African American Studies, she described her intimate interactions with the exhibits of three Black artists who have profoundly affected her this past year. 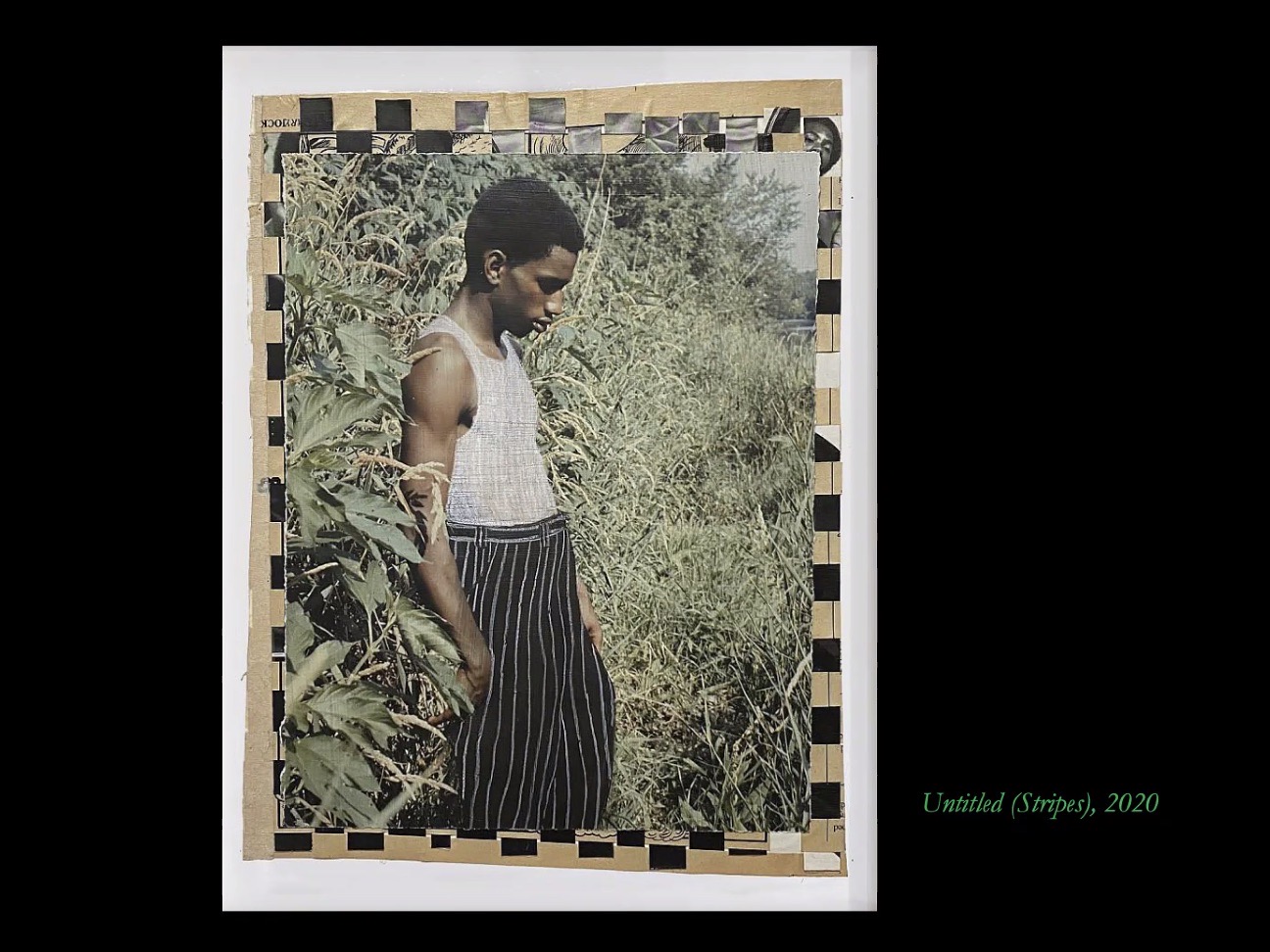 “This talk comes out of having—after a year and a half of lockdown, terror, and isolation—the opportunity to encounter the work of Black artists that I was not familiar with, and to be able to encounter it in ways that made the spaces of their exhibition much clearer and more fraught to me,” Campt said in the Feb. 3 webinar.

Campt is a professor at Brown University and a Black feminist therorist. She has authored five books, including the newly released A Black Gaze: Artists Changing How We See (The MIT Press, 2021), which explores the work of contemporary Black artists. Her webinar explored the work of three Black artists that were not included in her newest book: Maxwell Alexandre, Troy Monches-Michie, and Jennifer Packer. Through different mediums, their artwork collectively probes different parts of the Black identity—including masculinity, queer desire, and vulnerability—and establishes critical dialogue in the largely white art world, said Campt.

Jennifer Packer’s artwork. “Packer describes this series of works as created from a place of mourning—the mourning of the serial loss of Black lives, sacrificed too often and too soon,” Campt said.

She recalled her recent visit to Maxwell Alexandre’s New Power exhibit at the Palais de Tokyo in Paris, France, which features paintings of Black and brown people in scenes of everyday life. As museum visitors contemplate the illustrated people, the figures in the paintings also observe their real-life onlookers. While viewing the artwork, Campt arrived at an uncomfortable realization.

“In their gallery, all the visitors are Black. In mine, I am the only non-white spectator for the two hours I spend in the space. It’s a contrast I’ve internalized as normal—an expectation of being out of place that usually overtakes me as I approach the counter of a museum. It is equally palpable when I pass the threshold of a gallery and am met with stares or a complete lack of acknowledgement from blasé gallery staff who fail to look up from their counters,” Campt said. “New Power upends the dynamics of being out of place by recentering those often neglected and relegated to this position.”

“Watching the guard as he shadowed them while moving through the gallery, I was struck by the fact that the art gallery is one of the few places where Black folks, often armed, are permitted to actively surveil white audiences,” Campt said. “What do the guards think of encountering their painted simulacra in spaces where they are usually overlooked or made invisible? … Sadly, both my French and my nerves failed to let me pose these questions. But it’s nevertheless one of the central questions posed by Alexander and articulated unequivocally in New Power … How might we lay claim to these spaces in ways that refuse not only a white gaze of consumption or exploitation, but instead initiate moans of reclamation and redress?”

In a Q&A with the audience, Campt explained her creative process every time she encounters new art. In addition to considering the artwork, she observes the actual space surrounding the piece, the sounds of the gallery, and the people within the room, and then records her observations on an iPad.

What’s most important is not what we literally see in the moment, but how we respond to the artwork, she said.

“When I say that I’m writing to images, I’m writing from that response that they are soliciting from me. And in doing that, I’m trying to create a dialogue,” she said. 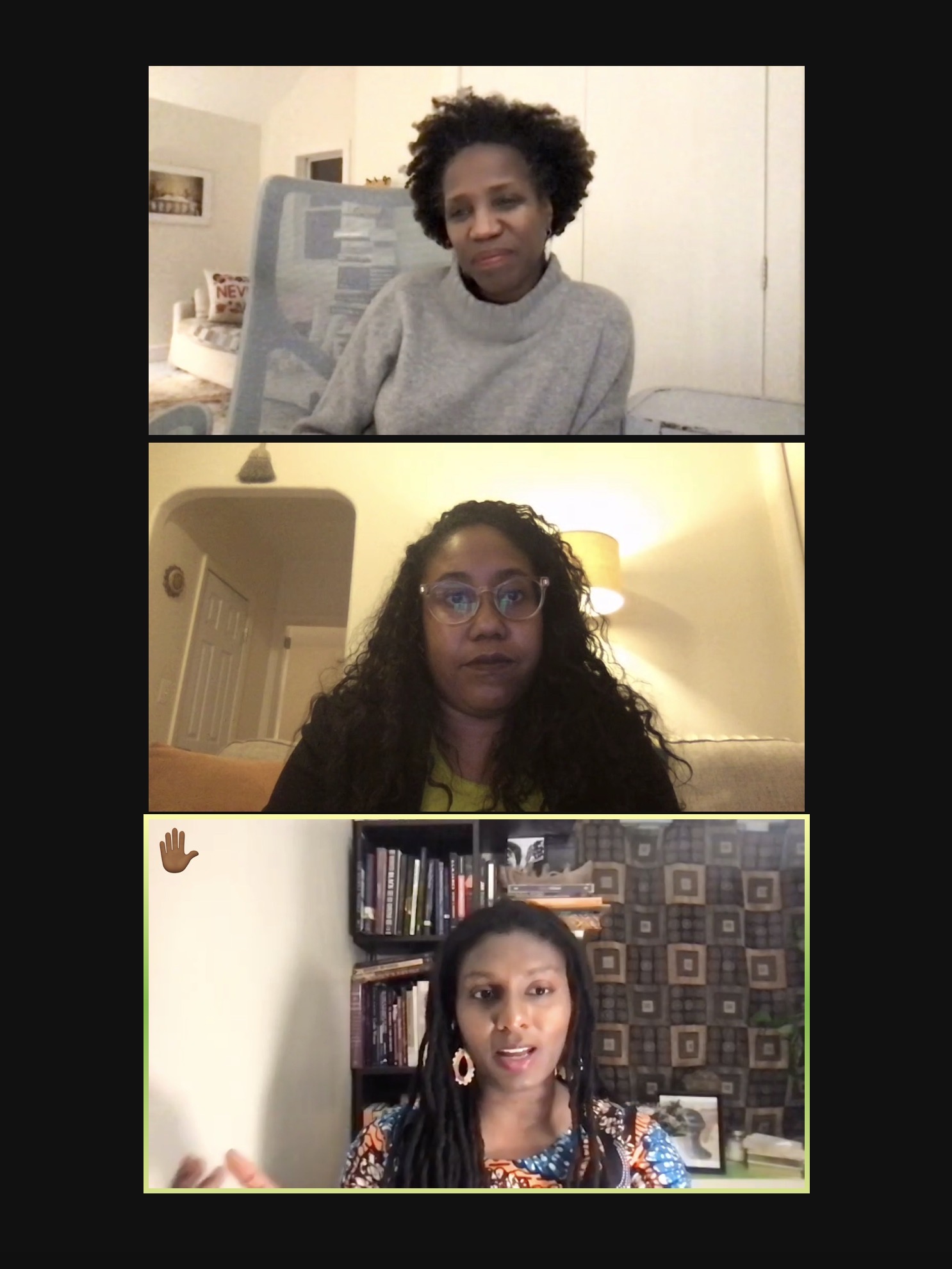 At the end of the webinar, moderator Brandy Monk-Payton, Ph.D., assistant professor of communication and media studies, said she observed in Campt’s work “this kind of insistence on the local, the intimate, and the interior as a way to sort of remain vigilant in some respects.”

“I’m wondering how we can sort of remain vigilant in supporting understanding of a Black gaze in this moment, this proliferation of wonderful media makers, creatives,” Monk-Payton said.

Campt said that the key to vigilance is discomfort.

This event was co-sponsored by the Arts and Sciences Council, the Division of Mission Integration and Ministry, and the Office of the Chief Diversity Officer.