skip to main content
Return to Fordham University
You are at:Home»Arts and Culture»Award-Winning Student Research Warns Against Exoticizing Indigenous History and Art
La Malinche depicted in a painting by Desiderio Hernández Xochitiotzin
Fordham College at Lincoln Center senior Joshua Anthony’s award-winning paper examines the morphing historical perceptions of the indigenous woman who was the chief translator to Hernán Cortés, the Spanish conquistador who conquered the Aztec empire. She was known as La Malinche, and though enslaved, she rose to an unusual level of prominence among the conquistadors. 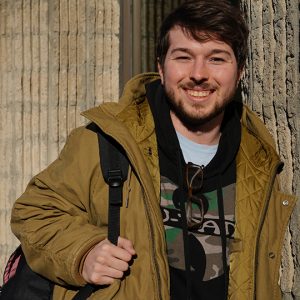 Titled “The Historiographical Journey of La Malinche,” the paper states that the historical narrative projected “contradictory constructions of La Malinche” that reflect the attitudes of those who wrote her story and reveal biases of ethnicity, gender, and class.

The paper received a Highly Commended award from the Dublin-based Global Undergraduate Awards in 2018, an honor bestowed on the top 10 percent of entries out of thousands of submissions from hundreds of colleges and universities. The awards program recognizes top undergraduate work from around the world and aims to connect students across cultures and disciplines.

A Variety of Perspectives

For the paper, Anthony examined books and texts from the 1500s to the 21st century and found the portrayal to be initially respectful, but progressively derogatory as the centuries passed, culminating in a Victorian-era publication that portrayed La Malinche as something of a “loose woman.” It wasn’t until recently that she received sympathetic treatment, with the publication of Camilla Townsend’s Malintzin’s Choices (University of New Mexico Press, 2006), which provided a 21st-century feminist view of her.

Anthony said that La Malinche was far more than a translator; she was akin to an adviser to Cortés and an intimate confidant. She had two children with him and yet her “importance was denigrated,” he said, and treated historically as though she “didn’t have any agency and was a hanger-on.”

“I think part of the reasons I was drawn to the stories was to see these different perspectives,” he said. “It’s also interesting to see how much control she wielded as the sole source of meaning for Cortes”

He said the different characterizations of La Malinche speak to the changes in society, and noted how looking at her through various lenses provided him with a clearer picture of the writers’ political motives.

“This research was pivotal work for me because it helped me with feminist perspectives,” said Anthony, whose work in the past focused primarily on general indigenous perspectives.

Looking Through the Lens of Native Peoples

Last spring, at Fordham College at Lincoln Center’s research fair Ars Nova, Anthony presented “Aztecs in Nuremberg: The Humanist Interpretation of the Conquest of Mexico,” which examined the humanist interpretation of the Spanish conquest of Mexico. He noted that 16th-century scholars from Europe viewed the experiences of the Aztecs through the lens of ancient Greece and Rome.

“My favorite historians of this period can read the Aztec language, look at their writings, and contextualize those,” said Anthony, who is double majoring in history and classical languages and literature with a minor in Latin American and Latino studies.

He noted that Aztecs were far from a homogeneous culture, but instead represented a variety of cultures and languages, not unlike Europeans.

“Studying the Aztecs showed me how many different sides of the story there are,” he said. “That’s crucial to understanding history and not getting bogged down by your preconceived beliefs.”

A Fresh Focus on Museums

Over the last few months, Anthony has been busy applying for graduate schools and thinking about his final project for his senior year. He’s been accepted to one doctoral program already, and he’s waiting to hear from others. Research-wise, he said he’s been concentrating on how museums display Aztec art and culture.

Museums often contribute to an “American exoticism” of indigenous cultures, he said, more often telling the story of the ancient cultures through the prism of U.S. sensibilities. He also noted that the way museums acquired such treasures needs to be highlighted in order to truly understand their colonial context.

“I want to look into how all these explorers in the 1800s discovered these artifacts and acted as if they were the sole owners,” he said.

He added that he sees his final project as a continuation of the work he started in his junior year and wants to examine, as he did with the 17th-century humanists, how contemporary historians and museums understand their holdings.

“In many ways, they emphasize that the so-called discoverers are heroes, as if discovering Aztec art were a form of finding Atlantis,” he said. “We need to see how, in some ways, the culture is unknowable and fundamentally different from the West, not something to exoticize.”

Assistant Dean Josie Gregoire, who coordinates FCLC’s participation in this program encouraged other students to apply for the awards this year.

“This year’s competition is now open and we encourage all students to submit their work.”